From Morpeth to Mount Martha 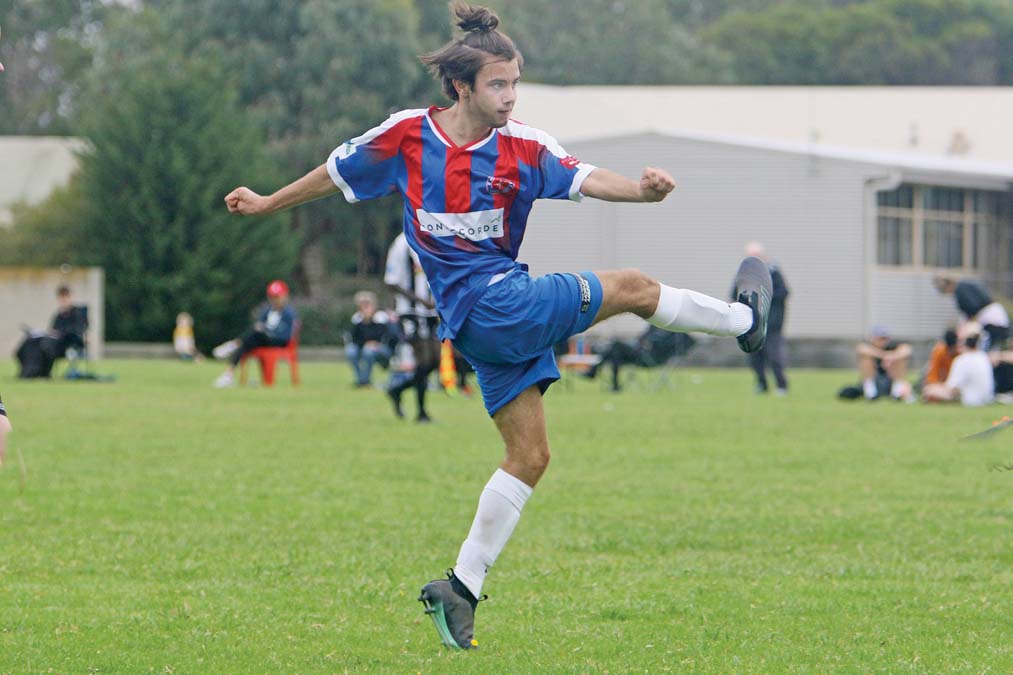 ETHAN Sanderson has come a long way in the last six years.

The distance between Morpeth in England’s northeast and Mount Martha is almost 16,895 kilometres.

In 2015 he made that journey as the Sanderson family settled in the Mornington Peninsula and it didn’t take long for the youngster to start playing the sport he’d grown up with.

“Before we came here I played for my local club back home mainly as a defensive midfielder,” Sanderson said.

“Initially I trained with Mornington then we met someone here on the Mount Martha committee who knew friends of ours back home and he told us to come down and have a look around the club.”

Sanderson, who turned 19 last Friday, was in his early teens back then and he immediately liked what he saw.

“It was very junior orientated but it also had a goal to get a senior side.

“With me being in one of the higher (junior) age groups it would be our group that would be the first senior side and I thought it would be a great opportunity for me to get into senior football.”

Last season’s shutdown meant that the youngest side in the competition would face its league baptism in 2021 and the introduction to playing senior football has been tough.

Sanderson readily acknowledges the challenge Mount Martha faced when coming to terms with playing against men.

“It takes you by surprise,” he said.

“I’d watched a lot of senior men’s football but once you are actually in the game you realise that there are all these little things that don’t really happen in juniors.

“You’ve got be tougher and you’ve got to put up with a little bit of push and shove.

“In junior football you’re protected from that but it’s so much different in senior football.

“The older guys definitely try and take advantage of you.

“They do little things like how they try and hold you up and they try and get inside your head but we’re learning how to deal with it.

“We’re starting to give it back which is good.”

A watershed moment in the young team’s evolution arrived on Saturday 31 July.

Mount Martha was winless on the bottom of State 5 South and although the venue was Civic Reserve, the club’s headquarters, its opponent was fifth-placed Pakenham United which had lost just one of its previous seven games.

Yet the locals defied the odds to record their maiden league victory thanks to a Sanderson brace that earned his side a memorable 2-1 result.

“It was euphoric, absolutely amazing.

“Coming off the pitch there was a massive feeling of relief that we’d finally done it.

“All the hard work in training and in games had finally paid off.”

It also vindicated the decision by his father Chris, Mount Martha’s head coach, to switch his son from an attacking midfield position into a central striker’s role.

Ethan Sanderson admits that there was “a little bit of nagging” involved as he pressed his dad to push him further forward but the relationship between father and son is sound both on the pitch and off.

“Basically he’s been my coach since I was nine years old and I quite enjoy it to be honest.

“A lot of people naturally think if your dad’s the coach then you’re going to be let off but he’s pretty hard on me.

“I always get the talk on the way back from every game about what I could have done better.”

And doing things better is on the youngster’s mind.

For himself and for his team.

“I’d love to get a goal-a-game ratio.

“At the minute I’m not far off it but that’s because I’ve missed half the season with injuries.

“My left ankle went in our last pre-season game so I missed three games because of that.

“Then I had an injury to my knee and I also had an operation.

“It’s been pretty frustrating as it’s been stop-start with injuries and now COVID.

“I haven’t really had a big run of games under my belt and that’s quite infuriating for me personally.”

Yet he sees a positive future for Mount Martha and he wants to play a part.

“When you’re on the bottom of the league it can get a bit disheartening but we always knew that this season was going to be a massive learning curve.

“We’ve been able to keep our heads up though and there’s a lot of good mates in our team and we socialise a lot which kind of keeps things together.

“Off the pitch the club is looking really good.

“I believe we’ve been told that we’re getting a new clubhouse built and hopefully that will be done by the end of next season.”

By then Sanderson is hoping that he’s achieved his goal-a-game target but he has a team goal in mind too.

“I’d like to help take Mount Martha up the league.

“I want to play at as high a level as I can but I hope it’s with Mount Martha.

“We’ll definitely be in State 5 next season but hopefully because of the progress we’re making as a young team we can finish a lot higher up the league.”