Orritt and the Smashing Pumpkins 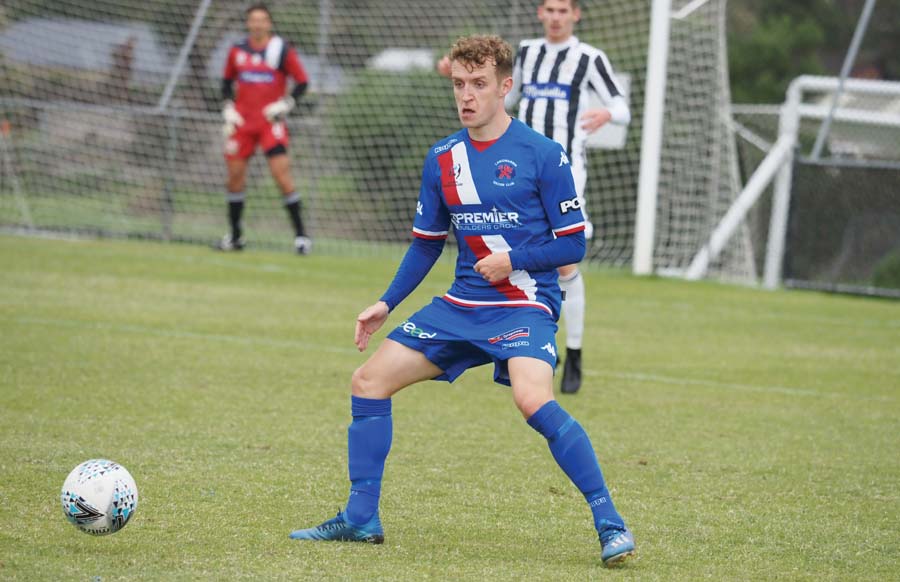 HE’S played football in more countries than perhaps any other player on the peninsula and he has a close connection with the Smashing Pumpkins.

His career has seen him parade his skills on pitches in England, Scotland, the US, Canada, New Zealand and Australia and he’s spent much of 2021 showing what he’s capable off with a team that calls Lawton Park home.

Life for Sammy Orritt started in Doncaster in Yorkshire 28 years ago.

Life for Orritt the footballer started in California at the age of three and the Smashing Pumpkins introduced him to the game and provided the springboard for what was to follow.

His father was in the quarrying and mining industry and the Orritts moved to the US when he was only six months old.

“Believe it or not my first team was called the Smashing Pumpkins and they ran a program for three- and four-year-olds,” he said.

When Orritt was “five or six” the family returned to England and he played with local club Retford United up until under-11 level when he trialled with Nottingham Forest “for 12 to 18 weeks”.

Orritt returned to Retford but shortly after moved to Epworth Colts “to play with lads I knew from school”.

He played with Epworth for two seasons before signing with Rotherham United in 2007 and playing in the under-15s.

He had two seasons there but suffered a knee ligament injury that took almost a year to recover from and when he was released he joined Lincoln United.

During his time there he scored in the FA Youth Cup but in 2011 the opportunity came to take up a college scholarship in the US.

The Ziada brothers, Keegan and Bryce, well known to local soccer fans here through their connections to Mornington and Berwick City, were to play a part in Orritt’s decision to join South Carolina’s Limestone University.

“Initially I was going to go to Michigan but they signed Keegan from Limestone so I ended up going there and playing with Bryce,” Orritt said.

It was a great move.

“I probably had the best four years of my (football) life to be honest.

“The lifestyle suited me and I made some really good mates that I’m still in touch with.

“It was like being in a pro environment but you were getting your (academic) education at the same time.

“I majored in PE and sports management with a minor in business in the end and that’s helped me later on.

“I work for a heating business as their internal sales manager.”

Orritt’s time in the US included two summer seasons playing with Canadian club Toronto Lynx in the Premier Development League.

“You’re not allowed to be paid to play but your accommodation is taken care of and they give you food vouchers and vouchers for local restaurants rather than pay you directly.”

While playing with Limestone Orritt won All-American honours in 2013 and 2014 and was named conference attacking player of the year in 2014.

In 2015 he returned to England and contacted a number of clubs.

Scottish side Kilmarnock notified Fife-based Cowdenbeath who offered him a trial.

“I did well and had a couple of pre-season games – one against Hearts – before they signed me.

“I was there for about six months and in all honesty I didn’t enjoy it there.”

Orritt was living in York and making the round-trip to Scotland but the closure of the Forth Bridge due to emergency repairs in December 2015 was the final straw.

“I’d just had enough and I ended up signing with Bishop Auckland.”

The irony of that move wasn’t apparent until March 2017 when he arrived in Christchurch, New Zealand, to take up a deal with Coastal Spirit thanks to a former teammate at Toronto Lynx who was then playing with Canterbury United, another Christchurch-based outfit.

His stint there was short-lived though.

He took advantage of a suspension early in his time with Coastal Spirit to visit his uncle in Melbourne in May that year.

That was when family friend Chris Marshall, long-serving assistant to current Oakleigh Cannons coach Chris Taylor, arranged for Orritt to go down to Mornington.

Shortly after Orritt signed with the Dallas Brooks club and his impact was immediate.

“I’ve been robbing a living off that ever since,” he said with a laugh.

“We had a good side and we had a tight group of lads who looked after me.”

Orritt had another two seasons with Mornington but eventually felt impelled to move.

“I’m an ambitious player and I wanted to play at the highest level I could.

“No disrespect to State League but I didn’t want to be stuck there for another year and get in a rut.”

Orritt emailed a few clubs to find out if they were interested and this led to his switch to Langwarrin but things didn’t go well in his initial pre-season there.

“I’d broken my collarbone in my last year at Mornington and I tried to recover from that without surgery.

“Just before Christmas (2019) Langy played Melbourne Victory in a pre-season game and I took a bit of a weird fall and did it again.

“I didn’t want it to keep happening so I decided to bite the bullet and have surgery.

“I was on track to be ready for the start of last season before COVID hit which actually allowed me to fully recover and to get fit again.

“Last year being called off wasn’t so bad for me because I had a bit of fire in the belly and wanted to give myself the best possible chance of coming back and breaking into a new team.

“This year with the on-off it’s been two weeks here then two weeks there and you can kind of keep yourself motivated but this latest lockdown has really knocked the wind out me.

“I think it’s because it’s so late in the year and it’s been harder to keep motivated and to keep going.”

Orritt has had to adjust to playing in the NPL and what is required from him at Langy is different to what he has been used to.

“I wouldn’t say it’s a bit slower than State League but lads want to play football a bit more where State League is more hell for leather.

“With me being a high intensity player I’ve got to get into the routine where you’ve got to let people have the ball sometimes rather than trying to win it back as soon as you can which is what it was like with teams I’d played for previously.

“Scott (Miller) has been really good.

“He talks you through things and how he wants you to play and when you’ve got someone who does that and gives you individual instructions it makes it a lot easier.”

We mightn’t see Orritt in action again in 2021 as ongoing COVID restrictions look likely to scupper the season.

His deal with Langy is for this year but he’s keen to stay and is positive about the club’s short-term prospects.

“If Scotty and the club want to keep me then I’ll be there.

“The people that are down there every week and the people that run the club are great and I really enjoy knocking about with the lads there.

“Maybe next year if we can keep everyone then we can certainly make a push for promotion.”