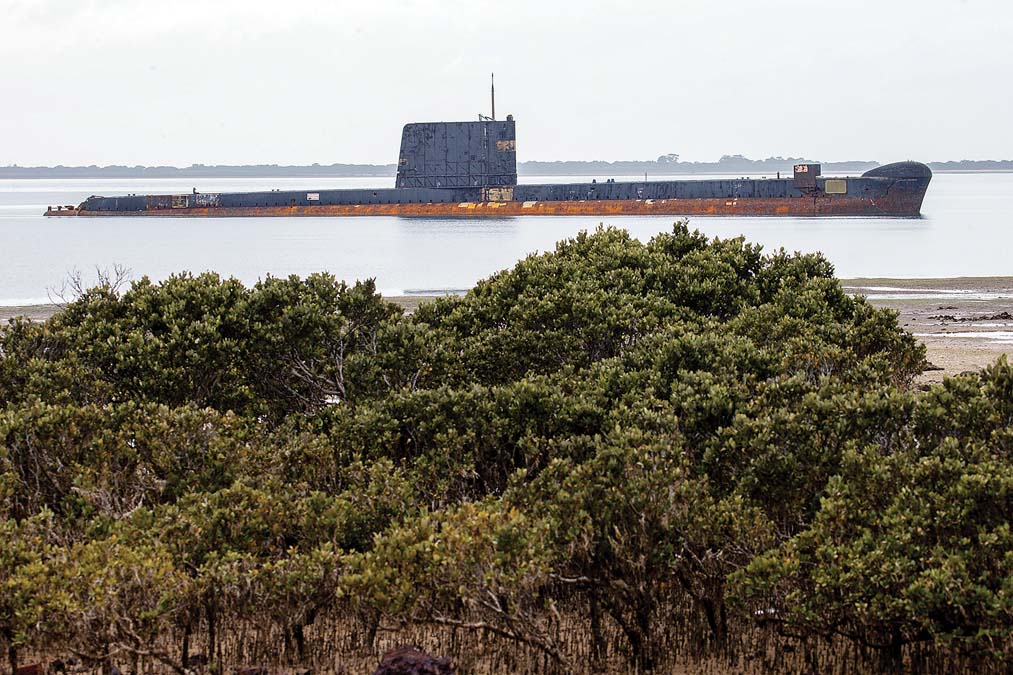 MANGROVES in Western Port are providing a safe, shallow but temporary mooring to the submarine Otama before it is either towed away for scrap or pulled out of the water on inflatable rollers. Picture: Gary Sissons
Share
Facebook Twitter LinkedIn Pinterest Email

THE deadline to bring former HMAS Otama submarine ashore has been pushed out to 2 October.

Western Port Oberon Association says it has been given a two-week reprieve as it tries to find a way to haul the 1978 submarine out of Western Port and onto land near the Crib Point jetty as part of a marine tourist attraction.

Association vice-president Keith Claughton said yesterday (Monday) that consultants were completing plans detailing the work required, timeframes and expected costs of bringing the sub ashore as part of applications for permits from Mornington Peninsula Shire and the Department of Environment Land Water and Planning.

“If we don’t have approved plans in place to bring it ashore by [2 October] Parks have indicated they will come and take it,” he said. The sub would most likely be towed to Adelaide for scrap metal.

Mr Claughton said the association was talking with a NSW marine salvage company about hauling the vessel ashore on huge airbag rollers at a cost of around $300,000.

“What we really have to do is find someone to fund the work – perhaps a tier of government or a wealthy benefactor,” he said.

Mr Claughton said having the sub on shore would be “a boon for Hastings and the region as a whole”.

“No one here is taking any money; it is all governed by an Act of Parliament, and we have the RSL, Vietnam Veterans and the Australian-American Association behind us,” he said.

Mr Claughton said the association had paid $40,000 to the Navy to have fuel removed from the sub in Fremantle in 2002 before it was towed to Western Port. The 33,600 litres of sulphuric acid-based electrolyte remaining on board is sealed inside two 228.5 tonne batteries serving as part of the vessel’s ballast.