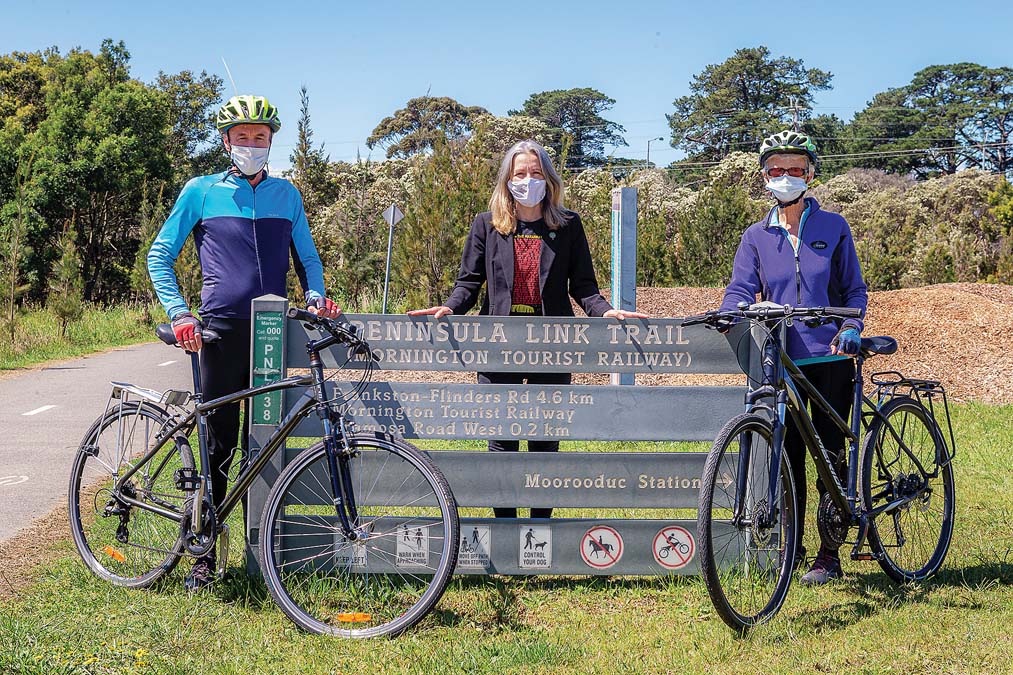 THE partially-built Peninsula Trail has so many community benefits that Mornington Peninsula Shire is pushing the state and federal governments to deliver $50 million for its completion.

This would include $20 million for phase 1 (2022-26) on top of $2m already secured from the federal government for the Somerville to Baxter section.

The completion of the 100km trail – described as “transformational” by the shire – has also received the official endorsement of all eight peninsula Rotary clubs with Rotarians working on projects to enhance the trail, such as rest stops.

The government money would fill “significant gaps at strategic locations” across the trail network to “achieve an integrated off-road trail and realise the active transport, recreational, tourism and cultural potential of this infrastructure”.

Gaps in the trail, previously called the Bay Trail, include the Moorooduc to Mornington leg which will run along the old railway line from the end of the Peninsula Link trail at Moorooduc station to Mornington station, at the corner of Yuilles and Watts roads, and then into Main Street.

Proponent Graeme Rocke said the shire’s enthusiastic backing was a major step for the Mornington leg of the project which he said was “shovel ready”.

“This community path will incorporate safe walking, running and cycling traverse points across Bungower and Mornington-Tyabb roads for school children and elderly and disabled members of the community for people of all ages and abilities,” he said.

“Most of the work has been completed, it just requires lots of public support.”

The shire allocated $490,000 for the trail in its most recent budget and will be responsible for maintenance when finished.

The expenditure is in line with the council’s community consultation in its Imagine 2040 Vision which prioritises better and safer walking and cycling infrastructure across the peninsula.

The Peninsula Trail is predicted to generate an economic output of $48 million ($23 million direct and $25 million indirect), supporting 129 full-time equivalent jobs (51 direct and 78 indirect) during its construction phase. The operational phase is estimated to deliver $3.3 million direct-visitor expenditure and $5.6 million in health cost saving benefits to peninsula residents each year and support 35 full-time equivalent local jobs.