The Sybils want to knock out gas 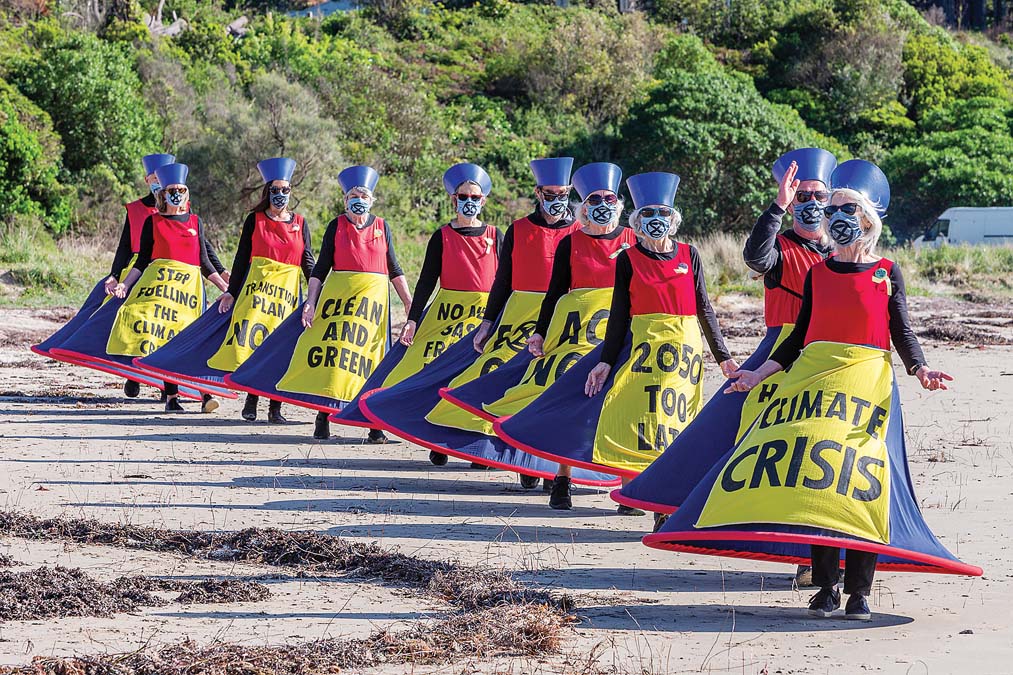 ONCE free of lockdown and allowed out to gather as a group, the Sybil Disobedients wasted no time in arranging a performance to emphasise their belief that Australia needs a “properly articulated” plan to cope with the “climate crisis”.

Dressed in their signature hooped dresses, hats and signs, the troupe walked slowly along a section of The Pines beach at Shoreham last Tuesday morning (26 October) before assembling in front of a sign in the sand marked Code Red – Climate Crisis.

More specifically, the Sybils were calling for an end to gas exploration in Bass Strait.

“We are forced to do this as we just feel that there is no acknowledgment by our government about the global issue, our part in it and, most importantly, the urgency to do something meaningful now,” Jamie Edgerton said.

The Sybil Disobedients are members of Extinction Rebellion Westernport, and say they represent “thousands of ordinary people living on the Mornington Peninsula and regional Victoria who feel their voices are not being heard”.

“Life is hanging by a thread; we need to address the climate crisis now.”

He said the federal government was only listening to the powerful gas and oil lobby, rather than acting on the findings in the recent [United Nations Intergovernmental Panel on Climate Change] report that says we must move away from any new gas, oil and coal extraction”.

“We must end our addiction to fossil fuels and support clean, green renewable energy.”

“We are running out of time to make the right decisions about acting on the climate crisis. We need to join our global partners and commit to stop fuelling the climate crisis by not exploring for new gas in Bass Strait and processing it in Hastings,” he said.v“There are so many opportunities with renewable energy for all but doing nothing now will risk everything.”