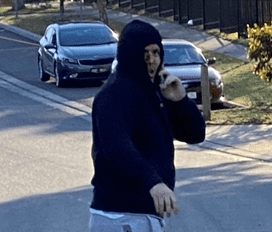 Major Collision Investigation Unit detectives have released images of two men and a vehicle wanted in relation to a fatal hit-run collision that occurred in Carrum Downs this morning.

The driver of a red Holden crashed into a number of road workers on Hall Road near the intersection of Lats Avenue about 7.15am.

The man fled on foot and got into a black Hyundai SUV on Rowellyn Avenue a short time after the collision.

Sadly a 44-year-old Bayswater man died at the scene.

A 38-year-old Traralgon man was airlifted to hospital with life-threatening injuries.

Images of two men, one which investigators believe to be the driver of the red Holden, along with a second man who was driving the black Hyundai have been released as part of the ongoing investigation.

Anyone who has information regarding the whereabouts of both men or information relating to the black Hyundai is urged to contact Triple zero (000) immediately.

Police are also appealing to anyone with dash cam footage of the collision or black vehicle to contact Crime Stoppers on 1800 333 000 or submit a confidential crime report at www.crimestoppersvic.com.au