Sea takes the beach by storm 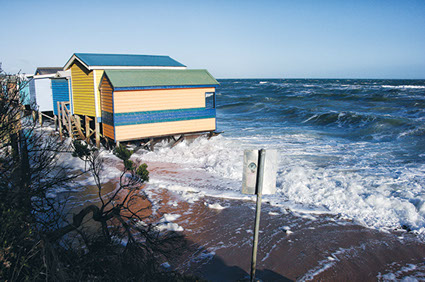 NEW assessments of the durability of imported sand at Mt Martha Beach North may be required in the wake of last week’s storms.

Thousands of tonnes of sand were trucked to the site in May 2010 after a series of storms had eroded the beach down to underlying clay and rock.

A two-year study commissioned by the Department of Environment and Primary Industries estimated the beach was continually losing sand and would need renourishing in five to 10 years.

“Nourishment sand has also been moved to the back of the beach, distributing itself along the cliffs. This increased berm height at the base of the cliffs will provide improved stability to the bluffs and decrease the likelihood of slumping due to undercutting from wave attack,” a report by coastal engineers WorleyParsons stated.

“Offshore survey shows that much of the sediment has moved into offshore bars located towards the middle of the beach. These sand bars could be a good source of sediment for future nourishment.

“No significant section of the subaerial [uncovered by water] beach has been identified in this study where sediment has accumulated.

“History suggests that the south of the beach should experience a build-up of sediment over time, and there may be a more significant accretion of sediment occurring … over a time scale greater than the two years of this study period.”