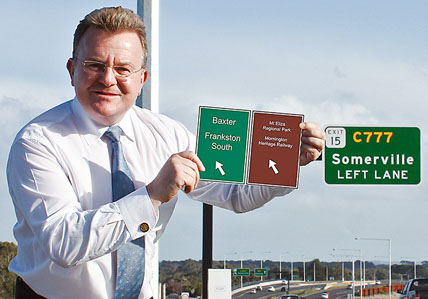 PENINSULA Link freeway has been open for seven months but the authorities are still discussing the location and types of locality and tourism signs.

The freeway opened on 17 January but there were no signs on the four-lane road showing traffic where to exit to reach Baxter, Hastings and the Western Port side of the peninsula.

Dunkley federal MP Bruce Billson weighed in to the issue late last week when he said a Coalition government would contribute $175,000 to “refresh and update the ‘Tour Peninsula’ tourist directional signage and to correct location signage errors such as omitting the Baxter township”.

“I have worked with the community for several years to develop a plan to secure Peninsula Link but it’s important to update tourist directional signage that takes into account this great new asset to help locals and visitors find key destinations,” Mr Billson said.

“Ending the ‘Bermuda Triangle’ treatment of Baxter by properly recognising the township with directional signage off the freeway is a matter of basic respect for a community that has the road at its doorstep.

“Optimising the economic and employment benefits of Peninsula Link means installing tourist directional signage for regionally significant destinations to help move visitors with ease and convenience to the many enchanting experiences, natural attractions and tourist destinations that add to the appeal of the peninsula and provide so many jobs.”

In late January, Western Port Tourism’s Lisa Dixon said it was very disappointing and a blow to the revival of tourism in the region that there were no signs to Hastings and no signs directing people to tourism destinations”.

Linking Melbourne Authority, the state government’s freeway management authority, said there were no signs as the authority “did not wish to create issues in local communities by encouraging excessive truck usage on roads that are not designed or built to carry large volumes of heavy vehicles”.

LMA community and stakeholder manager Gemma Boucher said the authority had “carefully considered both direction and tourism signage for Peninsula Link in conjunction with Southern Way [the consortium that built the road], Abigroup [the freeway builder], VicRoads and Tourism Victoria”.

“This had to take into account standard signage practices as well as carefully considering whether it was appropriate to be encouraging truck movements on to the local roads that connect with Peninsula Link,” she said.

Mr Billson blamed the state Labor government for not including a comprehensive signs plan when it signed off on the private-public partnership with freeway building consortium Southern Way, which was managed by Linking Melbourne Authority.

“There are a number of known shortcomings in directional and tourism signs,” he said.

“I had hoped the directional signage issue would have been resolved by now. It’s time to get on with it and this is why we have promised money.”

“There should also be brown tourism signs letting motorists know there is a new tourism information office in Hastings,” she said.

A Tourism Victoria sign on Western Port Highway near the Ballarto Rd roundabout in Skye directed travellers to tourist information offices in Frankston and Dromana, which was 47 kilometres away, she said.

“Staff at the Frankston tourist information office have had people walking in and asking for directions to Western Port,” she said.

Western Port Tourism has written to Tourism Victoria asking it to update the sign.

“It would be good to have one of these at the northern end of Peninsula Link,” Ms Dixon said.