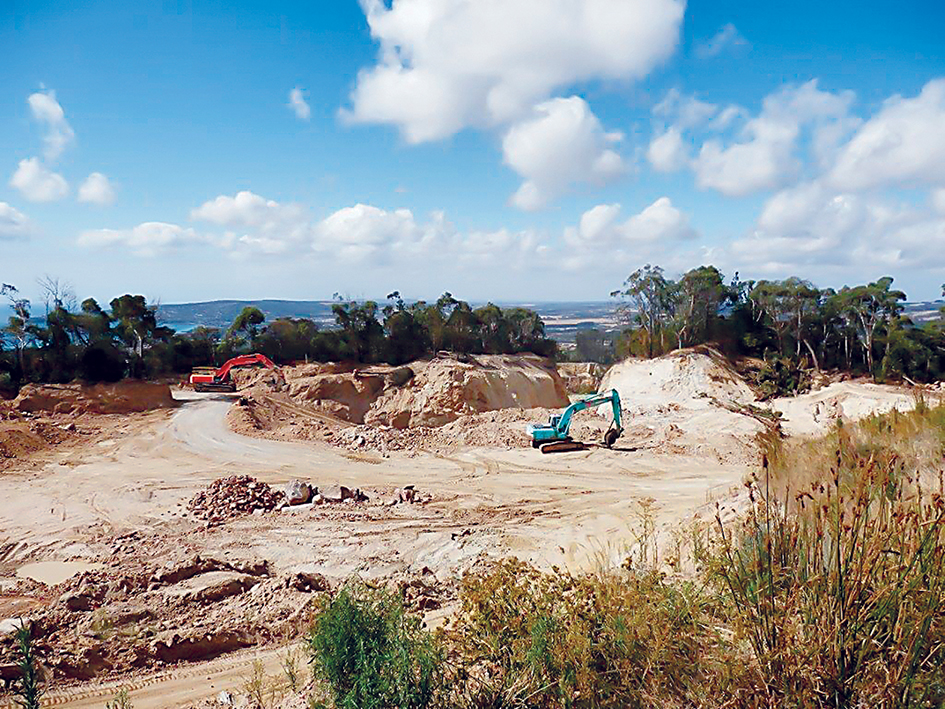 HILLVIEW Quarries has opened a new pit on Arthurs Seat and has started removing gravel and stone after clearing bush and building haul roads.

The work explains the higher than normal amount of dust created by the company in recent months, which has generated public comment and complaint.

The company gained permission to open the new area from Mornington Peninsula Shire in January 2006.

A condition of the permit was Hillview should avoid stripping topsoil or overburden from the site “during the summer months where possible”.

The new pit is southwest of the main pit and is closer to Arthurs Seat Rd. It was formerly the site of Hillview’s magazine, where explosives are stored.

The News understands the main pit is no longer being worked as it has become uneconomic.

Owned by the R E Ross Trust, Hillview extracts about 650,000 tonnes each year of high-quality aggregate and crushed rock.

The company lodged its planning application with the shire in August 2005 and it was open for public comment between late September and early November.

Just one objection was received. The council approved the plan in December, no appeal was lodged at the Victorian Civil and Administrative Tribunal, and the permit was issued in January 2006.

The permit replaced one issued in May 1989. He said the January 2006 permit was amended in May 2006 “to allow the temporary replacement and relocation of the existing plant/crusher” but The News understands this has not occurred.

The permit includes a landscaping and rehabilitation plan.

Hillview owns about 60 hectares (150 acres) on the northern slope of Arthurs Seat at Dromana.

The company says quarrying at Hillview’s site on Arthurs Seat escarpment has occurred for about 90 years.

“Hillview and Maw formed a partnership to develop the site into a modern quarry operation, transforming the site from its seven small separate quarries to a single … operation and manufacturing plant.

“After some early disruptions due to clearing and permit challenges, Hillview reopened in 1971 with a new crushing plant and work plans that allowed the site to be opened up with modern quarrying practices.”

Hillview says it is “duty bound to preserve and enhance the habitat and flora on the site. Hillview has planted more than 80,000 trees … which incidentally was totally clearfelled for farming land in the early 1900s”.

It is located in the green wedge zone and is subject to an environmental significance overlay, vegetation protection overlay, significant landscape overlay, and an erosion management overlay.
Existing remnant vegetation is considered to be of high conservation value and site is of state significance for fauna.

Sections of Arthurs Seat State Park border the west, south and east boundary of the property.

The shire permit states Hillview must enter into an agreement with the shire and the Department of Sustainability and Environment (now Department of Environment and Primary Industries) to “provide for the protection of the 40 hectares of remnant vegetation as an offset site” that would “include the implementation of the environment management plan”.

The company has planted or allowed the growth of sallow wattle to cover cleared areas.

Areas of wattle contain no undergrowth and provide inferior habitat for animals.