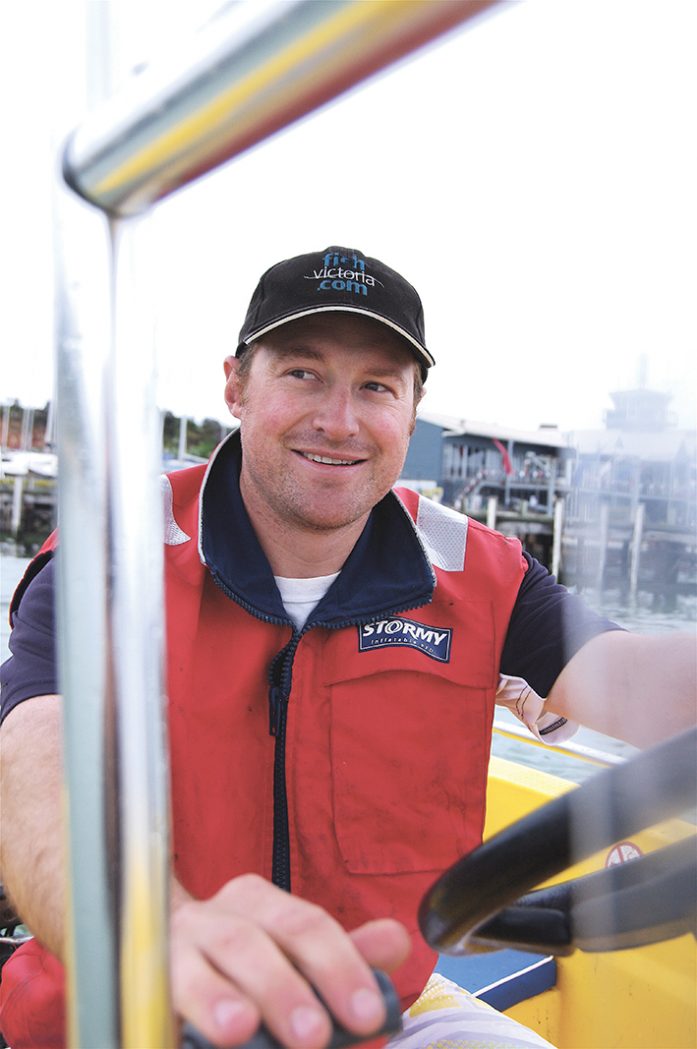 Smooth back rays are not protected as long as the angler plans to eat his catch – and not just leave it to die on the beach, according to Fisheries Victoria.

In the incident, a group of Asian men had caught the stingray – known as Old George by locals – and dragged it down to the beach before being coerced into releasing it by a passer-by. It reportedly then swam back under the pier and, hopefully, survived. (‘Anger over resident stingray catch’, The News, 25/11/2014).

Pingiaro, whose column regularly appears in The News and who runs Mornington Boat Hire at Schnapper Point and Yaringa Boat Hire at Somerville, said publicity surrounding the catch could be used on social media to denigrate recreational angling.

“I am concerned that fishing is becoming a political pastime,” he said. “Different people – such as PETA [People for the Ethical Treatment of Animals] – could use it to push their own political agenda.
“It’s all about the perception of fishing.”

Pingiaro said “a lot of people with a lot of pull” monitored and trolled through social media and he occasionally saw reposted images – such as the stingray – that could be used to further their aims.

“The world is getting too savvy,” he said. “Fishermen are their own harshest critics, but they should know that they need to be more aware. That stingray catch could tarnish the sport.”

Asked if recreational anglers sometimes let their egos get in the way of responsible fishing, Pingiaro said the “green eyed monster could rear its head” when anglers are out to catch their personal best. “It’s a lot like golf, or anything that can be measured by size and weight,” he said. “It can be brutal out there; very emotive.”

Pingiaro said the need for commercial netting bans in the bay had not been scientifically established. “We’ve had the Hutchins’ family [forebears of Neville and Dalton] netting off Fisherman’s Beach [Mornington] since the early 1900s and, if anyone should have the right to fish here, it is them.

“The government can’t just turn around and say ‘You are banned’. They can’t just use minimal evidence and ban it because everything that is sustainable should be ok; they can’t just lock people out, such as the netters.

He said all user groups should be considered equally and only scientific – not emotional – evidence used to manage them.

Pingiaro said “most people on the Mornington Peninsula are privy to using a rod and line – it’s part of our lifestyle”. But he said he didn’t like seeing “huge culls” of fish.

“Do we have to catch our bag limit?” he asked.

“This is quite an emotive issue; people see red on both sides. It is not for one body to yell and scream but for the fisheries and the government to scientifically study the science and plan to manage the bay’s sustainability.”

“No one would consider doing to other animals what some so casually do to sea animals – trick them into impaling themselves in the mouth and pulling them into an environment where they can’t breathe.

“Fish, like this stingray – even when released after being caught – can suffer from damage to their delicate fins and mouths making it impossible to eat.

“Other problems include losing their protective scale coating, making them vulnerable to disease, with a dangerous build-up of lactic acid in their muscles and oxygen depletion.

“Researchers at the Oklahoma Department of Wildlife Conservation found that as many as 43 per cent of fish released after being caught died within six days. But, whether they are bass or basset hounds, catfish or cats, all animals treasure their lives and feel pain.”

She said a British government animal welfare advisor, Dr Donald Broom, had proved that fish feel pain like all animals.

“The scientific literature is quite clear,” he reportedly said. “Anatomically, physiologically and biologically, the pain system in fish is virtually the same as in birds and mammals.”

“Angling doesn’t just hurt fish, either. Every year, anglers leave behind a trail of victims that includes millions of birds, turtles, and other animals who suffer debilitating injuries after swallowing fish hooks or becoming entangled in fishing line. Wildlife rehabilitators say that discarded fishing tackle is one of the greatest threats to aquatic animals.

“We cannot dismiss the rights and feelings of fish simply because we perceive them to be less intelligent than other animals. Superior intelligence does not entitle one human being to abuse another, so why should it entitle humans to abuse other animals?”