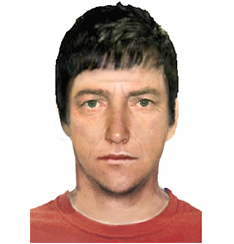 Detectives from the Frankston Sexual Offences and Child Abuse Investigation Team are on the hunt for a man who exposed himself to an elderly woman in Carrum Downs last year.

Investigators have been told the 65-year-old woman was walking south on Lyrebird Drive when she was approached by a man who appeared to be fiddling with his fly around 7.15am on 13 November.

As he got closer, the woman noticed that he had exposed himself and she ran away in alarm.

As she began jogging towards home, the man jumped in his car and drove past her.

Detectives believe the incident is linked to a similar offence in Skye which was reported the day before.

During the second incident, a 16-year-old girl was walking south on Golden Way when a man driving past made an obscene gesture around 4.45pm.

The teenager told police the man continued to drive past her multiple times as she made her way home.

Investigators have released a FACE image of the man they believe may be able to assist them with their enquiries.

He is described as being Caucasian and aged in his mid-late 30s, with tanned skin, short brown hair and an athletic build.

It’s believed he may have a tattoo on his right calf and was driving a dark grey 4WD with green P plates and a partial licence plate of “WVI” at the time of the incident.