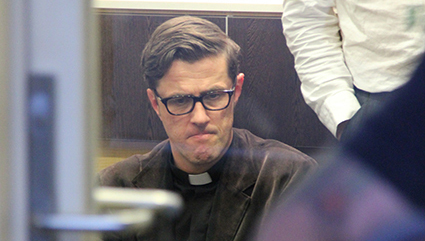 POLICE have evicted the leaders of a Christian group who staged a sit-in protest today (Wednesday 6 May) at the electorate office of Flinders Liberal MP Greg Hunt.

Shortly before seven Christian leaders who had refused to leave the Hastings premises were arrested at 5.40pm, Mr Hunt released a statement criticising the Love Makes A Way group who were protesting against the federal government’s asylum seeker policies.

A Christian coalition of Uniting Church, Baptist Church, Church of Christ and Peninsula City Church members grouped under the Love Makes A Way umbrella arrived at Mr Hunt’s electorate office at 11am this morning to demand the Abbott government commit “to release all children” from the Nauru and Manus Island detention centres.

Mr Hunt questioned why the Love Makes A Way group did not mention people smuggling in Europe when speaking to him about children detained at Nauru and Manus Island detention centres.

“I am surprised they didn’t make an appointment with me and chose to arrive on a day I wasn’t in the office,” he said in the statement.

“I am also surprised they have not raised the recent issue of deaths at sea in Europe caused by people smuggling.”

Staff at Mr Hunt’s office called police who arrived at about midday to try to convince the Christian leaders holding a prayer vigil inside the office building to leave.

“The Love Makes a Way protest group is welcome to make a formal appointment to meet with me at any time,” Mr Hunt said.

“I respect their views and their right to a peaceful protest. I have spoken with them about their concerns over the phone today.”

The Christian leaders had refused to leave the Environment Minister’s office in Hastings until Mr Hunt made a pledge “to release all children” from the Nauru and Manus Island detention centres.

About 20 Love Makes A Way members had also maintained a vigil outside the Hastings office.

“Today I have spoken to the Prime Minister’s senior adviser on national security issues and have relayed the Love Makes A Way group’s request for a moratorium on any further transfers of asylum seekers to Nauru or Manus Island and the immediate release of all children into the community on the mainland.

“I have also spoken to Immigration Minister Peter Dutton, who again reiterated that we have seen a 90 per cent decrease in people in detention since the Coalition came into government. He said he will not rest until all children are released from detention.”

Uniting Church Reverend Cameron McAdam told The News Mr Hunt had made some “positive” comments but had not supported the Love Makes A Way group’s call to immediately end the detention of children at Nauru and Manus Island.

“He definitely has a heart for resolving this issue … we’re keen to see a moratorium on any further children being moved to Manus or Nauru but he couldn’t do that.”

The Reverend said he appreciated Mr Hunt’s efforts to speak to Immigration Minister Peter Dutton on the group’s behalf.

He also praised police officers’ handling of the situation both before and after the arrests.

Those arrested were not detained by police and were charged with trespass offences.

“[An officer] made the comment that we were probably the friendliest protesters that he had ever dealt with,” Mr McAdam said.

The Reverend was less impressed with Mr Hunt’s comment about the group not mentioning deaths at sea in Europe.

“We would be deeply concerned about people drowning at sea, whether that’s in Australia or Italy, and as a world community we’ve got to find a way for people to move between countries, especially those that are under threat.

“We note the Italian government is rescuing rather than driving [boats] back so I refute that we don’t have any concern about that at all – that’s just rubbish.”

A spokeswoman for Mr Hunt said the minister mentioned the deaths at sea in Europe because “he feels very strongly about the deaths that occurred at sea here and the result of not detaining people here will entice people smugglers to bring boats to Australia … he would rather have no lives lost at sea.”

Senior Sergeant Steve McRae said police “did everything we did to prevent them being arrested and advised them several times in relation to consequences of standing in the foyer.”

“We waited it out until about 5.30pm at night and gave them an ultimatum. The officer manager then revoked their licence to be there,” Sen Sgt McRae said.

“Apart from the fact they actually didn’t move when we asked them to they were very cooperative. Nobody was injured during the protest.”

He said the protesters “were prepared to be arrested for the cause”.

Seven police officers were on site to deal with the situation.

The protesters – six men and one women – could appear in court at a date yet to be fixed.