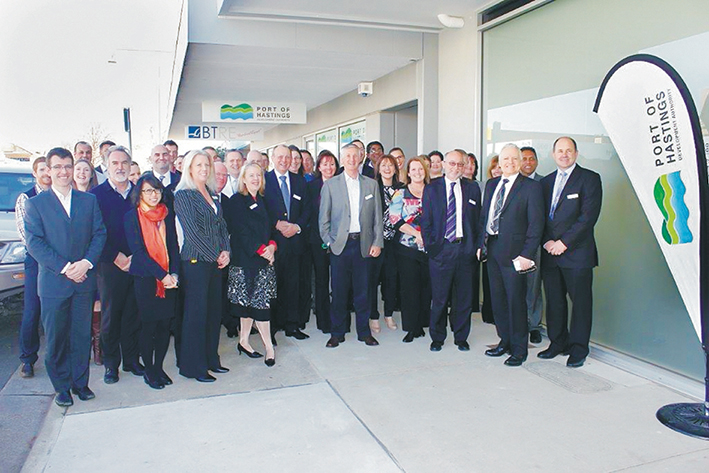 Boom times: Less than one year ago the expanding team of staff at the Port of Hastings Development Authority was celebrating the leasing of new offices in High St, Hastings. They were joined by Hastings MP Neale Burgess (who unveiled a plaque inside the offices), standing third from right with the authority’s CEO Mike Lean. This week staff numbers are down to 14 and most of the office space will go unused. Picture: Gary Sissons
Share
Facebook Twitter LinkedIn Pinterest Email

STAFF numbers have been cut to 14 at the Port of Hastings Development Authority.

The latest cuts are in line with the Labor government’s aim of hearing from Infrastructure Victoria before deciding on a site for the state’s second container port.

While falling short of formally abandoning Hastings, this latest move is likely to leave a significant vacuum in the forward planning policies of the Mornington Peninsula and Frankston.

The Port of Hastings Development Authority has all but been left out of the latest state budget and must rely on ever decreasing revenues from port operator, Patricks Stevedores.

In the lead up to last November’s election Labor stated that its preferred location for a new container port was in Port Phillip, at Bay West near Geelong.

The previous Coalition government had favoured Western Port and planned to spend $110 million over four years to plan for the container port at Hastings. Municipalities climbed aboard, with seven councils in south east Melbourne commissioning a study that put the total cost of the port at $16 billion.

Frankston, which has promoted itself as being ideally suited to be the commercial hub of the proposed port, is this week likely to contact the Premier Daniel Andrews condemning the government’s lack of interest in developing a container port at Hastings.

Mornington Peninsula mayor Cr Bev Colomb was not available for comment on Monday but, if the feelings of former mayor Cr Antonell Celi are anything to go by, relations between the shire and the Labor government may be strained.

Her decision last August to enter the battle over the site for Melbourne’s next container port came a month after Victoria University researchers issued a warning that Western Port may not be the best option for a new container port.

The Build it – but will they come? report cast doubts on the need for a port to accommodate the world’s largest ships.

Last week the boom balloon fell flat as the development authority slashed staff to 14, from 32 at the start of the week and a high of nearly 100 a year ago.

Ports Minister Luke Donnellan gave assurance that the port – with an expected 50 ship visits this year – “will continue to operate as a port for the export of oil products and LPG, and the import of unleaded fuels”.

He said the development authority would continue to manage day-to-day operations of the port “and to chase further investment opportunities”.

Environmentalists will be watching to ensure that exporting coal will not be on that list of opportunities.

Revenue for the authority from Patricks Stevedores has been in steady decline, with annual ship visits dropping from a peak of 600 20 years ago to less than 50 this year.

“Port management requires a smaller workforce and budget consistent with its revised work program. The authority will reduce from its current size of 30 staff to 14 staff,” Mr Donnellan said.

Before the establishment of the development authority its predecessor had a staff of four.

“The government’s port policy is clear. The government will obtain advice from Infrastructure Victoria on the preferred location for Victoria’s second container port, including an assessment of both Hastings and Bay West,” Mr Donnellan said.

This week Frankston Council will most likely start a campaign “to highlight that the council will not accept the Bay West port as a viable option and the possible environmental and economic impacts to the Frankston City Council from significant and unnecessary dredging of the bay”.

Cr Darrel Taylor wants the council to write to Mr Donnellan, the Premier Daniel Andrews and Opposition Leader Matthew Guy stressing its concerns if the Port of Hastings is not developed as the state’s second port.

The report commissioned in 2014 by the councils – Mornington Peninsula, Frankston, Kingston, Casey, Greater Dandenong, Cardinia and Bass Coast – saw the port as a bonanza for jobs and manufacturing.

The report says the port would have a beneficial economic impact of an average of $60 million a year in gross regional product over 30 years; providing an average 400 jobs a year over that same time frame.