Shire to destroy wall of ire 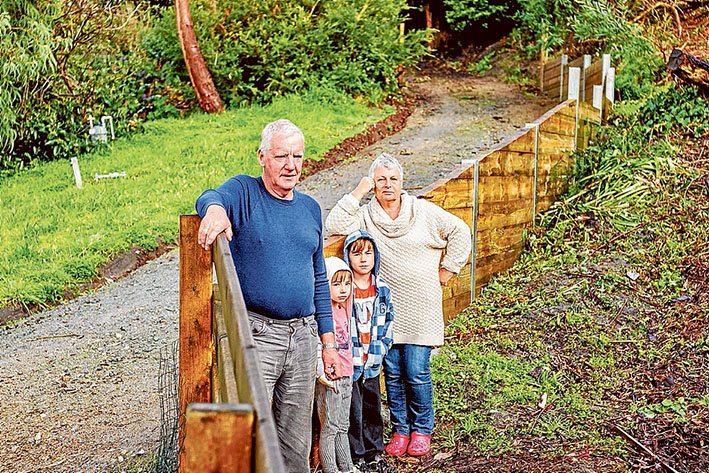 LIFE should return to normal in Mt Martha after the shire confirmed in writing that it would remove a wall blocking access to a road reserve by today (Tuesday).

The 1.7 metre structure blocks pedestrian access between Potts Lane and Grandview Terrace. It was erected in December by an adjoining property owner without council permission and has caused angst between neighbours.

John and Carole Van Der Helm, of Potts Lane, organised a petition opposing the wall with 50 signatures and presented it to the shire earlier this month. They were frustrated with the length of time the shire was taking to remove the steel and timber barrier, even though they were being told that it would soon be taken down.

This followed their letter to the shire in March, which said: “After consultation with residents and advice from legal services we feel that council are not responding to the needs of the wider community and, therefore, request a written response as to the reasons why our road is not open. Consider the prime issue:  On 13 December 2014 a resident, apparently acting with council approval, constructs a wall across a council road reserve to the benefit of that resident and the detriment of the wider community. We can no longer use the road reserve as it now terminates and begins inside private property.

“We request your response before the end of March 2015 as it is then our intention to move forward so as to seek a resolve [sic] via the Victorian Ombudsmen.”

Earlier this month, Ms Van Der Helm again wrote to the shire: “We were told the wall would be taken down two weeks ago. Yet nothing has been done. We feel that we are not getting anywhere. No one [from the council] is speaking with us.”

That changed after their plight became public (“Call for wall to come down”, The News 7/7/15). The couple received a letter from the shire’s contract superintendent Mark Newnham last week, confirming that the barrier issue had been referred to the shire’s environment protection and community safety unit. “The wall is scheduled for removal on or prior to 14 July. No further negotiations have been entered into with the relevant property owner,” Mr Newman said.

Ms Van Der Helm told The News: “This is the first time we have received an actual date on the barrier’s removal. We’re glad we have it in writing so we know what’s going on – even though it has taken seven months.”

Shire spokesperson Todd Trimble confirmed the decision. “I have been advised that it is the shire’s intention to have the wall removed as soon as possible.”