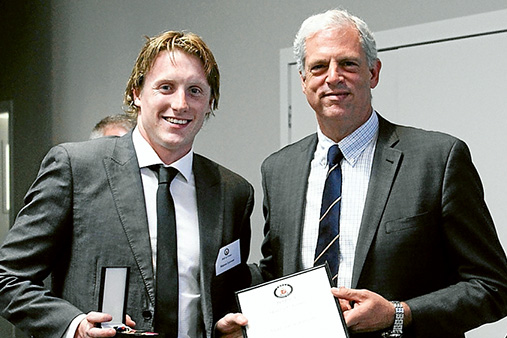 PROFESSORS, politicians, presenters, Olympians, comedians, footballers and one of the nation’s top “spies” were among 38 people inducted into the inaugural Hall of Fame of the Peninsula School on Saturday last week.

The hall of fame has been created by the alumni association of the school in Mt Eliza, The Old Peninsula School Association, TOPSA.

More than 120 people packed the H A Macdonald Pavilion at the school in Wooralla Drive to celebrate. They included three of the four principals who have led the school since it opened in 1961 – Harry Macdonald, Ray Hille and Stuart Johnston. Founding principal Rev Dr Dudley Clarke died in 2011 at age 90.

And the spymaster? Nick Warner, Director-General of ASIS, the Australian Secret Intelligence Service, who famously gave the first public speech about the service in 2012.

Two women were inducted – Australian Army captain Courtney Ames (class of 2002) and Kara Richards (2005). Capt Ames was dux of her year at the Defence Force Academy in 2005 and dux at Royal Military College Duntroon in 2006, was among the first women to qualify in a specialist artillery role, and was appointed one of Governor-General Quentin Bryce’s three women aides-de-camp in 2013. Ms Richards was a top level netballer, a member of under-age Australian squads, Australian Institute of Sport scholarship winner, and member of Victorian Fury, Melbourne Vixens and Adelaide Thunder.

TOPSA president Greg Sugars OAM said the hall of fame recognised and celebrated the achievements of inspiring alumni of the school. “By promoting their extraordinary success stories, other alumni and current students can be motivated and inspired to push the boundaries and realise their own dreams,” he said.

More than 7500 students have attended the school.