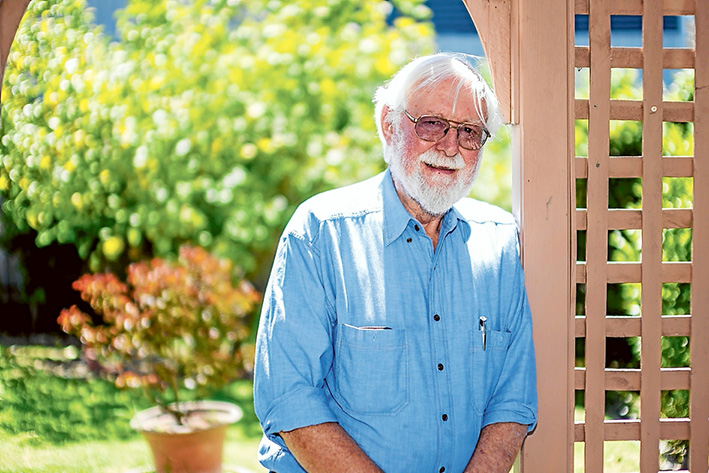 A Mornington resident for 20 years, Missen has written 450 pages of “historical romance” set in the Wimmera district of north-western Victoria in the 1950s.

‘A One Man Band’ was officially launched at Mornington Library, Saturday.

“It’s the area of Victoria I remember best as a child,” he said.

The book’s jacket says: “The hero, Eric Fergusson, travels from farm to farm with his mobile engineering workshop in an old Bedford truck, fixing machinery, tools and fences. He encounters sheep and wheat farmers, the goings-on of small town country life – and his future…”

The author said the character is a “composite of the many people I knew. I appreciate people who can turn their hand to anything.”

The choice of trade is insightful: Missen initially became an engineering draftsman before the war and was away fighting overseas from age 18-21. Returning home, he was encouraged to complete an engineering degree but opted, instead, for art at the then-Swinburne Technical College.

It was an uphill battle: “I tried to make a living as an artist but didn’t do much good and needed money to raise a family. I joined the Lands Department as a draftsman,” he said.

“I had no previous desire to write a book because I saw it as too difficult,” Missen says, having always used longhand. But, with the advent of computers, he was thrilled to discover how easy it was to write on screen, using the inbuilt Thesaurus. “I sat down and played with one and thought, ‘This is too good to miss’”, he said.

“I wrote the family history in 2001 and then joined the Federation of Australian Writers and began attending creative writing groups at Mornington Community Centre.”

The title of the book came about through the hero’s way of life and his love interest: a woman he meets in a country town and who encourages his love of music.

At the altar on his wedding day the hero says: “This looks like the end of the one-man band.”

His best man quips: “Val says she thinks it might mean we’ll soon have a chamber orchestra.”

Missen is an active member of Peninsula Legacy, having been secretary for five years.  He plays lawn bowl and attends writing and painting classes each week.