No lack of conversation on Western Port cruise 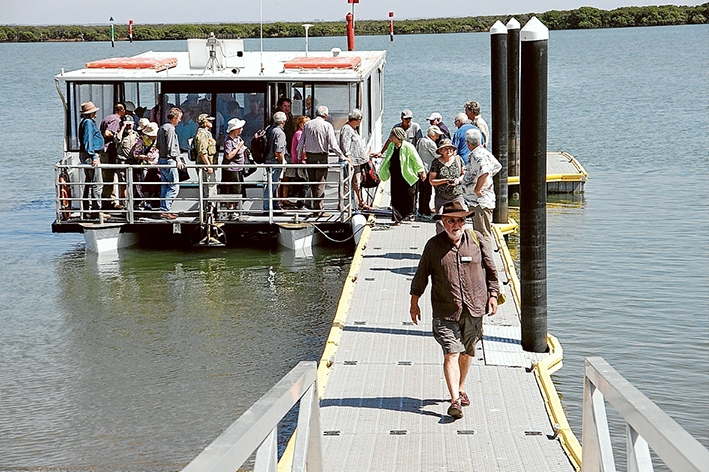 All ashore: Passengers disembark at Tooraddin after a cruise in the north eastern arm of Western Port which went as far as Stockyard Point, below, populated by one fisherman and seabirds waiting for the tide to drop.
Share
Facebook Twitter LinkedIn Pinterest Email DEMAND for berths has been so great that organisers have arranged another cruise.

The trip provides a chance for experts – professional and amateur – to share their thoughts and knowledge with other like-minded souls who are interested in the ecology of the bay.

Even using the word bay to describe the large body of water bounded by Mornington Peninsula to the west and the Bass Coast to the east can spark discussion and admonishment. It seems the officially gazetted name is Western Port, without any “bay”.

Another argument revolves around politicians constantly referring to Western Port being a natural deep water port. Not so, say their critics, it’s more like a large estuary with a deep channel formed by a long submerged river.

“The boat’s a chance for community people and agency representatives to get together and network,” organiser Ian Stevenson said. “They can interact, talk and examine issues related to Western Port.

“The boat also takes them to areas of Western Port to which they may have never been and which are hard to access.”

“That’s enough to fill the MCG 15 times to the top of its grandstands,” Mr Nottle said.

Taking out that much material would increase tidal flows along the already eroded Bass Coast.

“They’re excluded from the Freedom of Information Act,” he said.

Sandra Johnson, the PoHDA’s environment manager, said it was “business as usual” for the authority which has been stripped of money and staff since the election of the state Labor government.

She said the only remaining monitoring equipment was a wind station at BlueScope.

In answer to a question, Ms Johnson said the Port of Hastings was a “bulk port, but there’s nothing in the foreseeable future on brown coal”.

Greg Hunt, of the South Eastern Councils Climate Change Alliance, said studies completed five years ago had shown Western Port sea levels could rise 17 centimetres by 2030 and 80 centimetres by 2100 “but might now be out of date”.

He said the effects of these rises were “something local government has to deal with in planning”.

Western Port had been identified as a “hot spot” for the “interplay of coastal processes and storm surges”, already causing severe erosion at Lang Lang and Tooraddin.

“Someone will have to pay [to protect property and infrastructure], nationally and state,” he said, adding that government agencies were already “ducking for cover”.

Mr Stevenson spoke about failed attempts at replanting seagrass, with energies now being directed towards re-establishing mangroves in the north eastern section of Western Port.

Farmers and government agencies were building rock walls to prevent erosion and invasion of their land by the sea.

He said earlier, ad hoc building of levee banks had included waste and car bodies, “which was intolerable”.

French Island-based environmental consultant Chris Chandler said spoke about the island’s history, both before and after the introduction of koalas.

He detailed the felling of forests for salt farms and to fuel chicory kilns and how a developer in 1963 planned a causeway across the narrowest strip of water between the island and the mainland.

Rejected by the state government, the causeway would have connected Stockyard Point, near Jam Jeerrup to the 700-lot Paradise Point estate.

As the boat neared these two points of interest, binoculars and cameras were able to focus on a lone fisherman on the mainland and a flock of pied oystercatchers on the island.

No trace of a causeway, just a feeling that nothing is likely to happen there soon.