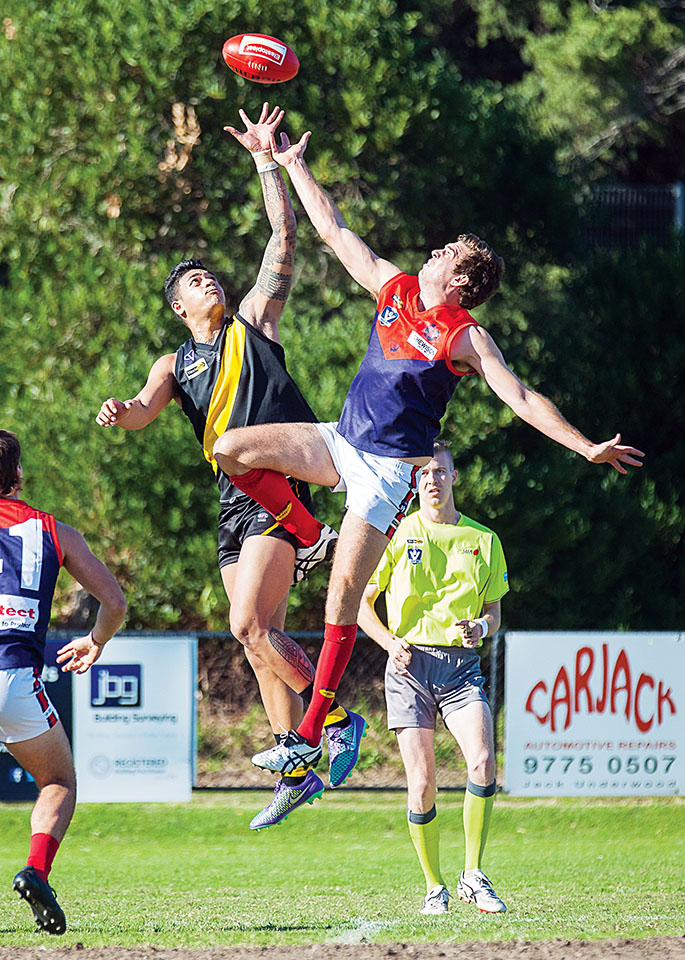 LANGWARRIN proved once again just how tight the MPNFL Peninsula Division competition is when it recorded one of its best victories in recent times.

Playing Mornington at Mornington is never a happy hunting ground for most sides, however, the young Kangas came to play, led all afternoon and won 13.16 (94) to 10.11 (71).

The Doggies seemed to get their mojo back last week against Chelsea with the return of Michael Gay and Jimmy Cameron, however neither had much influence on Saturday.

Langwarrin beast Matty Naughton is considered one of the best big men in the game and he proved why again on Saturday, beating the league medal winner Gay and playing a vital role in the victory.

Without two of their best players, Gerard Brown and Sean Herdman, the Kangas stuck to their guns and recorded their first win of the season under the guidance of new coach Brad Dredge (Shane Paterson coached the first win against Edi-Asp while Dredge was getting married).

Blake Harkness had a wonderful break out season a couple of seasons back but was back to his best through the middle with a couple of goals, while Nick Tuddenham proved that ability can become reality with a near best on ground performance.

The Kangas have found a genuine goal kicker in Kieran Albanese. Albanese has booted 21 goals for the season after booting another four on Saturday.

Opposition teams have stated previously that Langwarrin’s ‘good’ is very competitive, however, they don’t do it for long enough – that changed on Saturday.

The challenge now for the young and rebuilding Kangas is to find that level of consistency.

For Mornington, it was a shocking result. Talent-wise and on paper, they have the Kangas covered.

The reality is that the Doggies are a long way off it and slowly losing touch with the top four.

Dominant five goal performances from Pines’ key forward targets Guy Hendry and a returning Tom Bongetti proved too much for Karingal to handle on Saturday.

The Bulls are lean at best down in defence and the Pythons forward power was always going to be the difference between the sides in the end.

However, in saying that, the Bulls were right in the game for the most part, leading by three points at the final change.

While the talk was about the Pines’ forwards, it was key backman Beau Hendry who dominated, along with Luke Potts in the middle of the ground.

Brett Burns and Anthony Joel were among the Bulls’ best, along with youngster Brad Occhipinti, who booted three goals.

Mt Eliza bounced back from its shock defeat at the hands of Bonbeach last week to get the four points against Seaford.

Tigers’ coach Ben Murphy told the RPP Footy Show live on Saturday morning (98.7FM from 9-10.30am) that his team’s performances against the ‘better’ sides in the competition had been poor this season and he wanted a solid, four quarter effort against the Redlegs.

Murphy certainly got that on the weekend, his side trailing by just one point at half time and by ten points at three quarter time. The Tigers booted 2.6 in the third and should have been closer or even in front.

The Redlegs turned up the heat in the last quarter with Rohan Heasley and Justin Van Unen (four goals) taking control and youngsters Blake Millane and Jordan Capkin having a real influence, eventually running out 13.15 (93) to 9.6 (60) winners.

Once again, Chelsea’s inability to make the most of their opportunities really did cost them.

At half time the Gulls had booted 2.10 after booting seven behinds in the opening quarter. Bonbeach was 7.6 at the major change.

The second half had little to do with conversion – Bonbeach was simply too good.

Jackson Sole and Justin Bennett dominated all afternoon for the Sharks and Chris Bryan was dominant with three goals.

Alex Trowell made a real impact with three goals in his first game and Shane McDonald finished with four majors.

Grant Trew and Matt Gardiner were the best of the Seagulls, while James Brain and Matty Baxter booted three goals apiece.

The Stonecats booted five goals to one in the third quarter after leading by just 19 points at the major break to break open the game.

Lew Roberts, David Bodley and Jack Greenwood all booted three goals each for the Stonecats while fleet-footed brigade members in Tony Lester and Jai Coghlan dominated.

Mark Meehan booted four goals for the Eagles and Chris Whylie was outstanding yet again in the ruck.