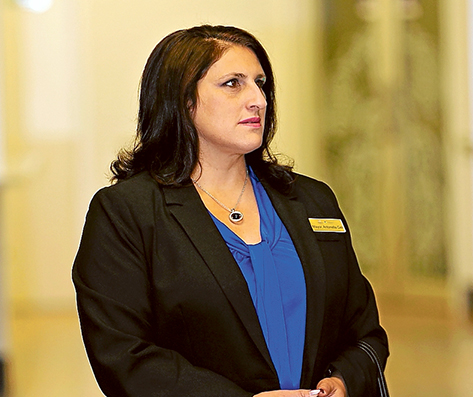 MORNINGTON Peninsula Shire has decided against pursuing Cr Antonella Celi for thousands of dollars she allegedly spent over her allowances.

Councillors last week reversed an earlier decision for the shire to seek repayment of what appeared to be about $9000 over what was allocated to her for conferences and seminars.

After the meeting, Cr Hugh Fraser told The News that the matter had been  a ”whitewash”, with no information provided on the management decisions surrounding Cr Celi’s expenses claims.

However, the matter is unlikely to be resolved soon, with Cr Fraser already planning to move a rescission motion at next council meeting.

A notice of motion put forward by Cr Anne Shaw that there had been “no overpayment” and to cease recovery action, ignited fiery debate and calls by Cr Fraser that the process had not been investigated improperly.

Councillors are allowed $4000 a year to attend conferences and seminars, but at council’s 26 April meeting, it was heard that Cr Celi’s spending had reached $28,520 during her current four year term.

It was agreed at that meeting that Cr Celi should repay the money allocated to her under her entitlements for conferences and seminars, and repay costs of legal advice from Maddocks Lawyers sought by council at her request in March.

Monday’s reprieve for Cr Celi came despite angry calls from Cr Fraser that the lawyers investigating the issue were not given information about the $4000 expenses limit, and that there had been no management report outlining details of the expenses requests.

“Why did the solicitors not have that brought to their attention?” Cr Fraser said.

It is understood the advice from Maddocks cast doubts on the shire’s ability to reclaim money from councillors. Governance manager Joe Spiteri said the confidential legal advice would be made public at council’s next meeting.

He said the solicitors were given “all relevant information” in providing their advice and that the motion intended to amend the earlier motion to recover the money.

Not happy with this explanation, Cr Fraser further questioned Mr Spiteri, this time on the adherence to a council rule stating that a previous resolution could only be revoked if it had not been acted upon.

As no recovery action on the overspending had begun, Mr Spiteri said the notice of motion was “valid”.

Taking offence at what he claimed was an unlawful “cross examination”, Cr David Gibb called a point of order and reminded Cr Fraser that council officers “should not be badgered”.

Cr Fraser then asked why there had been a “delay” of more than a month in sending a letter of demand to Cr Celi, to which Mr Spieteri said it was “not up to council to seek recovery”.

The motion to note that Cr Celi had not overspent and that no recovery would be pursued was supported by Crs Bev Colomb, Anne Shaw, Andrew Dixon, David Garnock and David Gibb, with Crs Graham Pittock, Tim Wood, Fraser and Tim Rodgers against. Cr Celi left the chamber during the debate and vote.