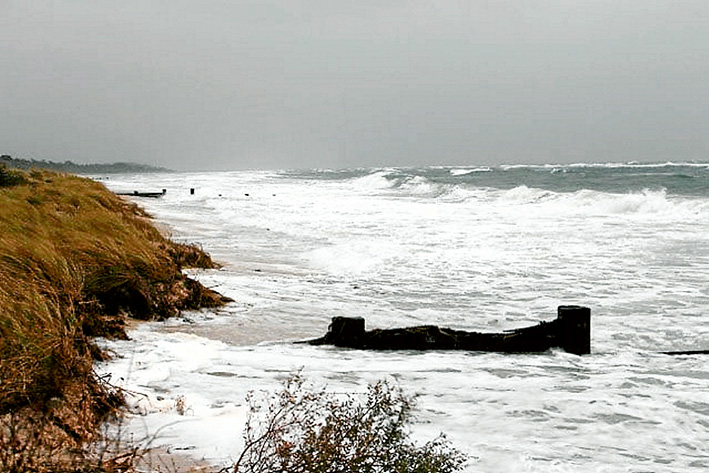 A LEADING state government environmental monitoring agency is playing down about erosion on Mornington Peninsula beaches.

Alarm is mounting over the loss of sand at several beaches, including McCrae, with claims that sand loss is due to weather and the deepening of Port Phillip shipping channels.

Paul Millsom, of McCrae, has accused authorities of ignoring the threat and not doing enough to protect the coastline (“Bay beaches face diminishing returns”, The News 28/6/16).

Port Phillip Baykeeper Neil Blake echoed Mr Millsom’s fears, drawing on data that suggests the increases in tide heights are substantially greater than predicted by consultants’ reports prepared for the Port of Melbourne Corporation before the 2008-2009 channel dredging.

Department of Environment, Land, Water and Planning spokesman Nick Talbot said last week the department was “not aware of significant erosion along the Mornington Peninsula from storm events this year”.

Mr Blake has recorded and mapped Point Nepean beach profiles and water levels, citing significant erosion exacerbated by channel deepening over the past five years. He has just started a study of McCrae beach.

He said the “prevailing” view that beach sand lost along the peninsula will eventually return had resulted in the real threat being ignored.

“We know that sea levels are rising, so councils and governments need to be acting now,” he said.

Mr Talbot said sand movements at McCrae Beach were not related to channel deepening and were a “natural occurrence”.

“Sand movements at McCrae beach are driven by wind-generated waves from within Port Phillip, rather than ocean swell and as such these movements are expected to increase during storm events,” he said.

“The coastline is a dynamic environment with sand movements along Port Phillip Bay being a natural occurrence that DELWP continues to monitor.”