Nets offer no protection for wildlife 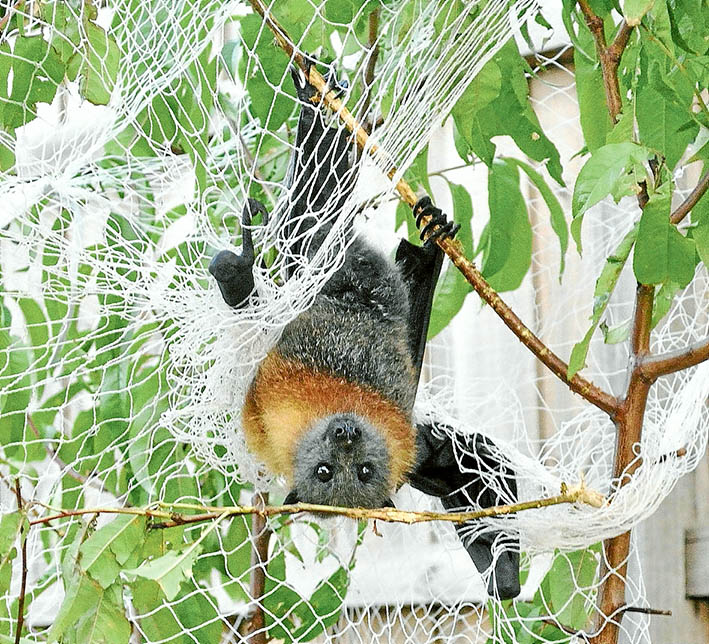 Michelle Thomas, from Animalia Wildlife Shelter in Frankston, says sugar gliders, possums, flying foxes and birds are often cruelly trapped in nylon netting and cannot chew or fight their way out. Instead they face an agonising and slow death as they struggle, often breaking limbs and suffering stress and exposure in the sun.

Ms Thomas, a registered wildlife carer, cares for up to 3000 animals annually, from as far as Brighton to Portsea.

She wants people to consider more eco-friendly ways of protecting fruit trees, such as using commercially available wildlife-friendly netting, or creating buffer zones between the tree and animals, with a simple frame that can be dismantled after fruiting.

“If the netting is draped straight over the tree, anything landing on it will get caught,” she said. “If you create a buffer zone by a frame you can protect your fruit and protect the wildlife.”

Ms Thomas said sugar gliders, kookaburras and even blue-tongue lizards are often attracted to the insects on the blossoms, not the fruit, but are still caught in the netting.

“Many people forget the relationship between animals and nature, and some animals are actually pollinators,” she said.

Under the Wildlife Act, it is illegal to harm or kill wildlife.

The Department of Environment and Primary Industries’ Animal Welfare Advisory Committee recommends alternatives to drape netting of trees, such as using shade cloth, which is effective but kinder to wildlife.

A department fact sheet states that up to one third of animals entangled either die from strangulation, blood loss, shock, or dehydration, or require euthanasia due to injuries sustained while entangled.

“Members of the community have a responsibility to ensure that their behaviour reduces the likelihood of harm and injury to animals, and netting installed over domestic ‘backyard’ fruit trees should be installed in a way that is ‘wildlife-safe’,” it states.

It is illegal to harm wildlife under Victoria law.

Amy Hidge, from animal rescue and support network,Wildlife Victoria, said there had been a 200 per cent increase in reports to their emergency response service over the past 12 months.

She said loose netting was effectively a death trap to wildlife, but that there were many wildlife friendly alternatives available at nurseries and hardware stores, such as Hail Guard, Veg Net, Fruit Save Net or plain Shade Cloth.

Ms Hidge said fruit bats were particularly important for pollination, with a single flying fox being able to disperse 60,000 seeds in a night.