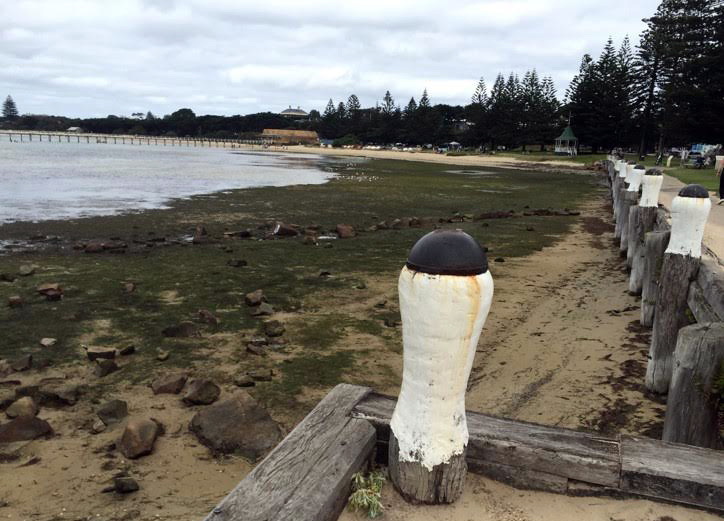 THREE leading Peninsula conservation groups are calling for an immediate halt to construction of a “dangerous” and unsightly concrete-stepped seawall at Sorrento.

Nepean Conservation Group president Ursula de Jong is furious work has begun on the “steps to nowhere” structure and says there has been inadequate community consultation.

She says the NCG, the Nepean Historical Society and the Port Phillip Conservation Council are opposed to the development “from environmental, historic, place sensitive and safety perspectives”.

The Department of Environment, Land, Water and Planning (DELWP) began work this week on the seawall structure, which will include a “meeting point” of coloured concrete steps.

DELWP acting regional director Chris Padovani says the steps will provide “a meeting point for people to comfortably sit at the water’s edge and enjoy themselves.”

“The stepped seawall design will provide seating areas with views and create an ambient interface between the foreshore reserve and the water’s edge,” Mr Padovani said.

The seawall will replace a 100-year-old timber seawall and is part of the DELWPs multi-million dollar renourishment program for the eroding beach.

However, Ms De Jong said the NCG’s discussions with the Nepean Historical Society and the Port Phillip Conservation Society revealed there was no “wide-ranging” consultation, as the shire had claimed.

She said the seawall may be the shire’s “preferred option” but there was little evidence of any other support for it.

“Nepean Conservation Group believes this stepped seawall is a poor solution for such an iconic historic coastal town as Sorrento, and requests a re-consideration.”

A submission to DELWP by the Port Phillip Conservation Council highlights the lack of disabled access, environmental insensitivity of the concrete design, and safety concerns.

PPCC president Jenny Warfe says the plan “looks like something out of a Roman amphitheatre”.

“It actually looks like the steps would lead into the water at high tide, and that’s dangerous.”

She is calling on works to stop and the plans revised.

“It’s certainly not too late to stop this so that we get something less dangerous and more in keeping with the beach environment,” she said.

Frank Hindley, chair of the Nepean Historical Society’s heritage and planning group, said the engineers had “gone mad with concrete”, and had put little thought into the end result.

“We are not opposed to a seawall, but surely timber walling would be more in keeping with the area,” he said.

Mr Hindley said a recent community meeting to unveil the plan was “not consultation”.

Ms de Jong said NCG was not convinced of the necessity of the Sorrento West Beach Renourishment project, which included $200,000 for extra sand that “may not stay” on the beach.

“These are steps to nowhere”.

The seawall construction is expected to be completed by October.

Mornington Peninsula Shire did not respond to questions from The News before deadline.