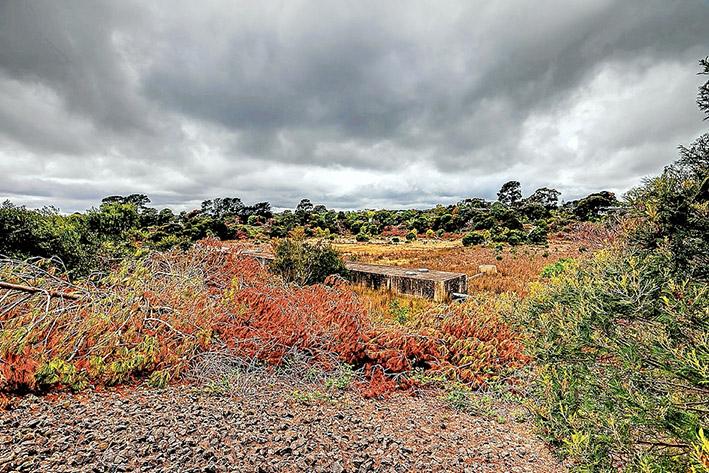 A FLYING mammal that lives on the Mornington Peninsula but is listed as “vulnerable” by the Department of Sustainability and Environment (DSE) could be the last hope of saving the former South East Water reservoir in Mt Eliza from development.

Since South East Water announced plans last year to rezone the 2.8 ha Kunyung Rd site, it has largely been untouched and remains one of Mt Eliza’s last wildlife habitats. A variety of frogs, flying foxes and possibly the almost extinct southern brown bandicoot and the nationally significant white-footed dunnart live there.

Environmentalists are concerned their protests over redevelopment plans are falling on deaf ears, with the lure of profit coming first.

However, there are hopes that an appeal to protect the grey-headed flying fox may give protestors “a national lifeline”. The mammal, which eats native flowers, pollen and nectar and has colonies at the site, is known to play a vital role in keeping ecosystems in good health.

Fears are also growing that most of the remaining environmentally sensitive land in Mt Eliza will soon be snapped up for development, with rumours that the buyer of the neighbouring Moondah estate in Kunyung Rd – Ryman Healthcare – is interested in acquiring the South East Water site.

New Zealand-based Ryman Healthcare recently paid almost $40 million for the 8.9-hectare waterfront property, and has indicated it is continuing to look for suitable sites to build more aged care facilities in Australia.

He said South East Water’s plan to redevelop its Mt Eliza land for profit showed it had little concern for the “hundreds of thousands” of native species living there.

“We all know about the giant panda and rhino but are oblivious to the animals in our own backyards,” he said.

Mr Karakitsos said South East Water should be true to its public image of caring for the environment.

The company has refused to back down from its plan to rezone and develop the land for housing, with chief spokesman Rupert Posner saying last week that the matter was “still being considered”.

Mr Posner, once the CEO for not-for-profit group Good Environmental Choice Australia, was quoted in online magazine Otter in 2013 as being concerned about the loss of orangutan habitat in south East Asia.

“This frightening outcome is avoidable and totally unnecessary.”

Mornington MP David Morris, who raised the issue in parliament in August, has called on Environment Minister Lisa Neville to halt the development of the land for housing due to its importance in “supporting local wildlife”.

Mr Morris called on the minister to “use her authority” to transfer the land to the Mornington Peninsula Shire so it won’t be “lost to housing”.

But Mt Eliza planning activist Rebecca Taylor, who started residents’ group ‘Kunyung Says No’ and an online petition to save the land, said the council should start being “transparent” about its dealings with South East Water.

“I have no faith in South East Water’s commitment to the environment, so it is important that what goes on between them and council is transparent,” she said.

“The council originally told us it had contacted all relevant residents about the rezoning proposal, but when I did a survey of residents, only eight in Mt Eliza had received notification.”

Environmentalists and residents are pushing for all or part of the 57 Kunyung Rd site to be rezoned for public open space or reserved as environmental nature corridors.

A Mornington Peninsula Council report last year suggests it has adopted a pro-development stance, by stating that a panel hearing found “no basis on which to recommend any or all of the land should be zoned Public Park and Recreation Zone or Public Conservation and Resource Zone as a result of its potential habitat values”. According to the report, the two-member panel had taken “unaccompanied” inspections of the site before making its findings.

In August another council report stated it had taken “further advocacy” to achieve an open space provision of at least 10 per cent and some provision for affordable housing at the site.

The impressive site has a complicated history and is within a broader 825-lot suburban housing estate established in 1924.

In the late-1950s, much of the land was owned by aviation pioneer Reg Ansett, who then bought further land from his neighbours and then sold this parcel to the government, which developed the reservoir.

The Environment minster Lisa Neville said projects likely to have a significant impact on a matter protected under national environment law, such as a threatened species, must be submitted to the federal environment department to see whether federal assessment is needed.

“It is the proponent’s responsibility to refer an activity under national environment law if they think it could cause a significant impact on a nationally protected matter,” she said.