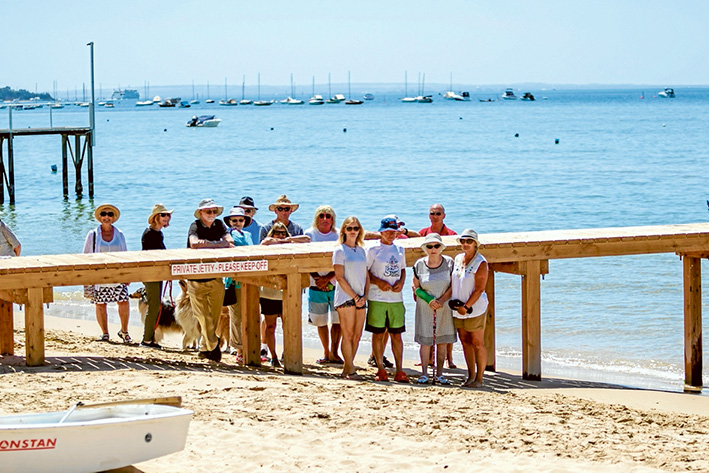 SORRENTO residents fear their access to a popular beach has been blocked because a private jetty being built to replace a former structure does not conform to the same specifications.

The jetty being built at Sullivan’s Bay is one of three jetties that have been at the beach for around 40 or 50 years. But residents are angry that it is being replaced with a bigger one that now prevents access unless the tide is out.

Leanne Austin said she was upset that the Mornington Peninsula Shire had not enforced regulations that required replacement jetties to be the same size.

“We can’t walk under this new jetty to access the beach, and not everyone can climb over it,” she said.

“It’s effectively blocked people from the using the public beach.”

Another resident, Trevor Robinson, said the jetty had a “keep off’ sign, which discouraged people from walking over it to get to the beach when the tide was in.

“But that sign isn’t going to stop me from accessing the beach, this is public property,” he said.

Ms Austin said her complaints to the council had been disappointing, with council officers being “dismissive and rude”.

“I have spoken to several people at the shire and they have told me that there is nothing that can be done now that the building has started, and that there had been no other complaints when I know for a fact that many people have contacted the council,” she said.

“In all my dealings I have tried to be polite and patients, but the whole experience has been horrific because they have been so rude.”

Ms Austin said she had been told by a council officer that there was “no record” of the specifications being included when the permit was passed.

Ironically, the beach is part of a tourism coastal walk from Cameron’s Bight.

“All the money the council has spent to improve nearby Cameron’s Bight will be wasted if people now can’t actually complete the walk,” Ms Austin said.

Mornington Peninsula Shire did not respond before deadline.