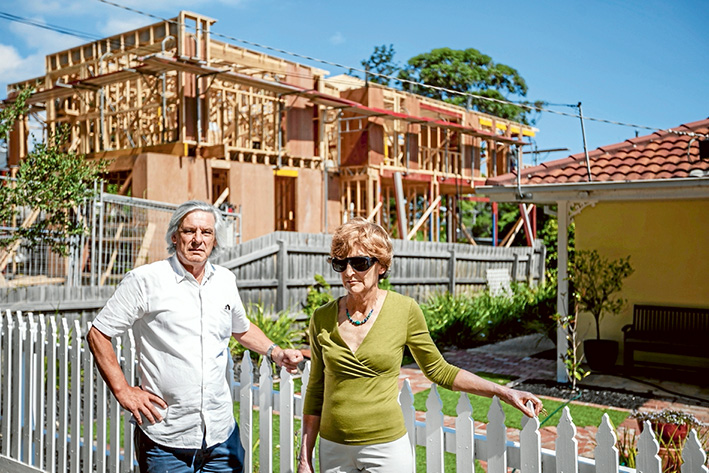 RESIDENTS of a historically-significant “garden” suburb in Mt Eliza have launched a legal challenge to protect the character of the estate amid fears protection overlays are being watered down.

The Ranelagh Residents Association has lodged an appeal with the Victorian Civil and Administrative and Tribunal over a planning application for a multi-storey house in Rendlesham Av.

Houses in the tightly-held bayside Ranelagh Estate, a 1920s, 800-lot residential subdivision designed as a “seaside garden estate” by American landscape architect Walter Burley Griffin, are subject to covenants that allow one dwelling on each allotment to retain the neighbourhood character and prevent over-development.

But the  association’s members are angry that the suburb’s unique character and heritage values are being eroded as older houses are demolished and Mornington Peninsula Shire allows new, larger houses that go against Griffin’s original vision for “unassuming houses that are embedded in natural landscape” .

Association president Victoria Grounds, who co-wrote the book Ranelagh A Special Place, and whose father Sir Roy Grounds (1905-1981) designed some of Australia’s finest properties, said development was happening all over the estate, often with “no thought” to protecting the neighbourhood character.

“This is not in the middle of the western suburbs, but the mantra of developers seems to be build it, sell it, move on.”

Another resident and former councillor, Leigh Eustace, said the trend to bigger houses, with little or no space for a garden, was changing the character of some parts of the estate.

“It is critical that the council observes the integrity of the Walter Burley Griffin concept for the estate, it is heritage listed and one of only two in the state,” he said.

The “garden suburb” was a product of early Melbourne planning reforms with a street pattern that broke the hegemony of a grid, discouraged through-traffic, and plenty of land for parks and gardens and other public uses. In 2005, Ranelagh was listed on the Victorian Heritage Register as a significant example of the design, with its “distinctive long curved roads, recreation reserves, internal reserves, communal facilities and “spacious triangular traffic islands”.

The emphasis on retaining the natural environment and principles of space and community were described as “ahead of their time”.

In 1997, it was classified by the National Trust of Australia (Victoria) and is listed as an “indicative place” on the Australian Heritage Database.

Despite attempts by developers in the past few decades to carve up the larger blocks for multi-dwellings, the estate has retained much of its original seaside resort character and “country club” feel. It is home to the Ranelagh Club, which promotes its “private access to the beach, a range of sporting and leisure activities and a vibrant club house”.

Ms Grounds, an architect, said the association’s VCAT appeal is based on several grounds, including that the Rendlesham development being “inappropriate” and contradicts the shire’s own planning scheme framework and the design and development overlay (DDO3).

Ms Grounds said the association wanted to raise the profile of the estate’s cultural and heritage significance so that residents, developers and council recognised the need to “respect” the estate’s heritage values, one of only two Griffin designed in Melbourne. The shire produced a conservation management plan for the estate in 2009, which recognised Griffin’s plans for the Ranelagh Estate to be “the ideal of community living”. It noted that the trend toward larger houses and the “cumulative” effect of development and vegetation loss had caused a loss of some of its original character as a seaside resort and country club estate.

Mornington Peninsula Shire did not respond to requests for comment.

Ms Grounds will give a talk on the history of the Ranelagh Estate at Mornington Library, 2pm Wednesday 22 March. The talk will feature stories from the book, Ranelagh: A special Place.