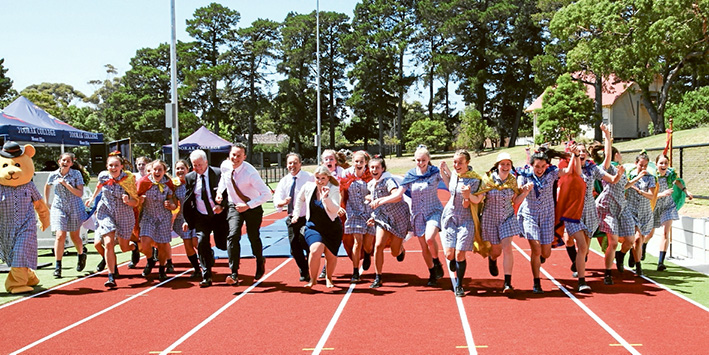 TOORAK College recently celebrated the official opening of a new international-standard sports track and hockey field, and is hoping the ground will fill a gap in quality hockey and track facilities on the Mornington Peninsula.

Hockey Victoria has expressed interest in having a permanent presence at the field, and the school hopes it can be a venue for  international competition.

Hockeyroos goalkeeper, dual Commonwealth Games medalist and Olympian Rachael Lynch joined students during a training session for the opening and expressed her approval of the facility.

Principal Kristy Kendall said the land used to be large open space known as “the wilderness” that was converted to an oval before being transformed to a track and hockey field.

“It didn’t get a lot of use as an oval, but now we hope it will be the most used athletics track around,” she said.

The oval is named after former Toorak student Jean Gilbert (nee Robinson) who cut the ribbon with chairman of the board, Peter Wickenden, watched on by Flinders MP and health and sport minister Greg Hunt, Dunkley MP Chris Crewther, Mornington MP David Morris and William Pepper from the Boon Wurrung Foundation.