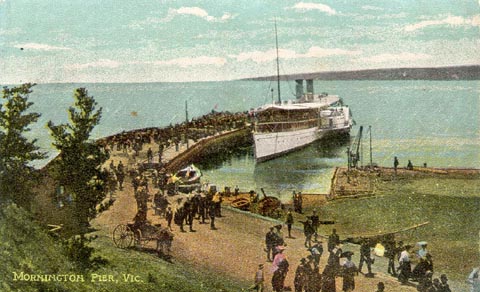 It was supposed to be the jewel in the crown. A pier befitting the wonderful township of Mornington, but since rebuilding the pier started in 2010, it has been nothing but trouble.

Now it seems the game is up, as it is rumoured that Parks Victoria will begin work dismantling the $15.3 million pier and replacing it with the old one.

“It has been a shocker”, said Fred Snickler from Parks Victoria.

“Don’t get me wrong, it’s a great pier. But the problem is, most of it is sitting on the ocean floor.”

It is believed that Park Victoria adopted a new approach for building the 2010 pier in Mornington, and the results have been disastrous.

“It was a unique combination of science and magic that we used in designing the new pier. We believed it was strong enough to withstand anything up to a once in a 100 years storm,” said Mr Snickler.

“The problem is that once in a 100 year storms occur three times a year in Mornington.”

The resulting effects means the wave “attenuators”, large concrete panels designed to stop waves in their tracks, have turned out to be next to useless in stopping the waves.

“What we now realise is that it is like a butterfly trying to stop a bullet train.”

The News has heard rumours that Parks Victoria staff have been dispatched to recycled timber factories around the state, trying to recover the parts of the old pier, in advance to reassembling it next summer.

“It is not as hard as it seems. If they could do it for Captain Cook’s Cottage, surely we can do it for Mornington Pier.”

When told that it would be much harder, as Captain Cook’s Cottage was initially assembled, and parts were numbered and catalogued as it was disassembled, Mr Snickler said nothing, but simply stared out his office window and blinked profusely.

The trouble isn’t expected to stop with replacing the old pier as news has leaked that the force of the ocean against the “attenuators” has actually moved the entire township of Mornington 20 centimetres inland.

The news caused a flurry of panic among local real estate agents who thought that beachside properties would now be 20 centimetres “less beachside”.

But surveyors for Parks Victoria quickly put their fears to rest.

“The pier has become a bloody big sail, that’s for sure,” said Gavin Nusermann, government surveyor.

“But it has moved the whole kit and caboodle inland. Houses are still exactly as close to the beach as they once were.”

He then explained to the gathered estate agents that the only effect was that Moorooduc has actually risen by five centimetres as a result of the plate movements.

This has caused a spike in Moorooduc property prices as agents spruik “sea-view potential” in the formerly low-lying area.

Locals will see an increase in activity in the coming weeks, as work begins on dismantling the new pier, with work expected to be finished on reinstalling the old pier by April 2018.