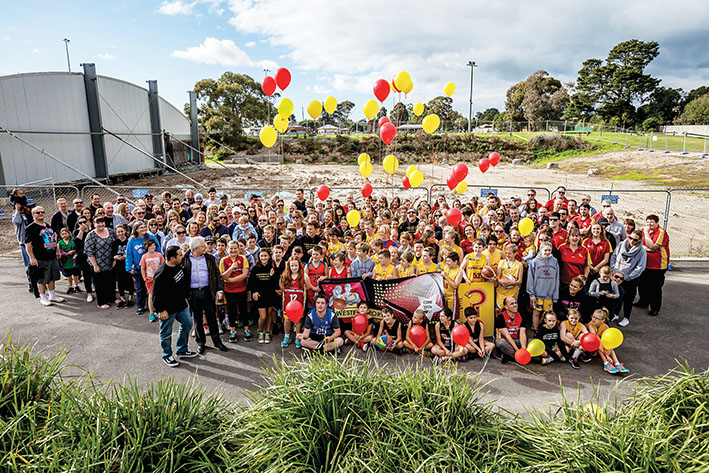 Stadium support: Protesters at the site of a new basketball stadium at Somerville want building to begin as soon as possible. Mornington Peninsula Shire says it is still negotiating with insurers over cover for the original stadium lost in a fire a year ago. Picture: Yanni
Share
Facebook Twitter LinkedIn Pinterest Email

ABOUT 100 Western Port Basketball Association supporters sent out a clear message to the Mornington Peninsula Shire on Saturday – they want their stadium at Somerville rebuilt as soon as possible.

The rally, described by the association’s operations manager Tyler Molloy as “awesome”, sought to galvanise support and generate action on rebuilding the 25-year-old stadium which burnt down 12 months ago.

“Certainly it shows people are passionate about getting a new stadium up and running,” Mr Molloy said.

Association president George Yerondais said those at the rally were impatient for action on rebuilding the courts.

“We’ve been waiting so long to have courts back and possibly upgraded,” he said. “We are trying hard to keep our players here, but it has been hard because we have stiff competition from other venues, such as Frankston, Mornington, Southern Peninsula and Casey.”

A petition calling for the “urgent rebuilding” of the basketball stadium will be presented to the state government by Hastings MP Neale Burgess.

Mr Burgess said the council should “get on with rebuilding the Somerville basketball stadium”.

“The stadium burnt down 12 months ago and the lack of information being provided by the Mornington Peninsula Shire Council has left thousands of local players in the dark about their playing futures,” he said.

“The association has done an excellent job of arranging alternative locations for games to be played, however, the constant uncertainty and travel to 17 replacement courts is taking its toll on the association and its players.”

Meanwhile, a company set up by Frankston Council wants to manage the rebuilt stadium (“Sports ‘in the swim’” The News 16/5/2017).

Speaking in state parliament last week Mr Burgess urged the government to help pay for the rebuilding of the Somerville stadium.

“It is high time the council and the state government worked together to provide certainty for the Somerville community around dates of the rebuilding of this vital piece of infrastructure.”

She said “ground-breaking works would start later this year”, while background preparation works “continued in earnest”.

Ms Leighton said the shire planned to “seek additional funding for the redevelopment from the state government which, if successful, would allow for construction of two additional basketball courts on the site”.

“Negotiations also continue with the shire’s insurer to reach an agreement for funding that will ensure that the new facility achieves a high standard,” She said.

Mr Yerondais said after reading her statement: “That is the most we have heard from the council for a whole year.

“We’ve tried hard over the past 12 months to work with the council but it has been a big disappointment that [it] did not revise the stadium’s insurance [policy].

“This business of negotiating with the insurers is very strange.”

There is speculation that the 25-year-old stadium was insured on a “like-for-like” basis.

“None of that was reviewed or updated before the fire,” Mr Yerondais said.

A shire allocation of $750,000 in its 2016-17 budget may help bridge the gap between the insurance payout of $2.5 million and the $3.25 million cost of a replacement two-court stadium. The cost of a four-court stadium is thought to be around $3.5 million.

“We want four courts as we use up to 15 courts a week, including five on a Friday night,” Mr Yerondais said. Other venues are at Dromana, Southern Peninsula and Peninsula School.

Mr Yerondais said he hoped to meet with shire representatives next week.

“We are committed to working with the council, but their lack of maintenance, such as regarding the insurance policies, has led to a poor situation.

“We want to achieve one thing and that is to get the facility back in place as well as have the ability to expand and extend.

“When you have a town with one club for one sport and you lose that club your risk losing it all.”