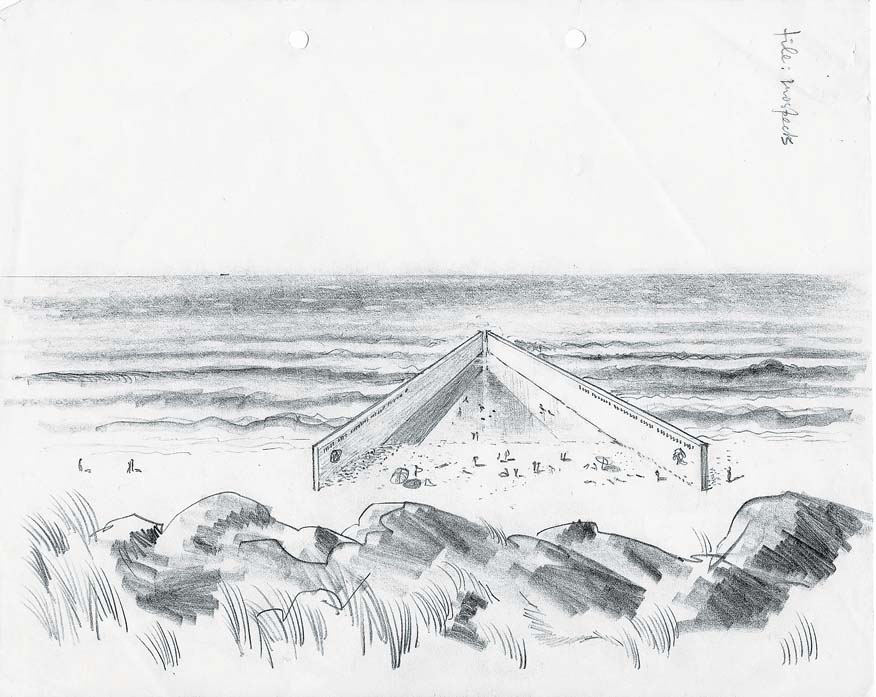 Memorial revival: A drawing by the late Robin Boyd of what he saw as a fitting memorial to prime minister Harold Holt who disappeared from Cheviot Beach, near Portsea, on 17 December 1968. The sketch was featured in a photographic exhibition of Boyd-designed Mornington Peninsula houses at the Mornington Peninsula Regional Gallery in 2011.
Share
Facebook Twitter LinkedIn Pinterest Email

PROPONENTS of a new memorial for former Prime Minister Harold Holt are hoping for a major commitment from the federal government on 17 December, the 50th anniversary of his disappearance.

Mr Holt’s body was never found after he went swimming with friends on that day in 1967 at the restricted Cheviot Beach.

The beach was within the then-Portsea Officer Cadet School, and now forms part of the state-run Point Nepean National Park.

A small stone memorial with a commemorative plaque sits above the beach while another plaque has been fixed on the underwater reef where Mr Holt was last seen.

In 1968, famed architect Robin Boyd sketched a memorial at the suggestion of Holt’s friend, Ross Shelmerdine.

Although that design: two 55 metre long by 3.6 metre high walls across Cheviot Beach and running into the water, is now acknowledged as being inappropriate, it could be a “catalyst, or starting point”, programming director of the Robin Boyd Foundation Tony Lee, said.

“We’re certainly not proposing walls. That was designed in the 1960s and things have progressed dramatically since then, such as how to protect the natural landscape at Cheviot Beach.

“I would hate to think that that [the diverging walls] is what’s being proposed.”

Mr Lee said the foundation and Stephen Shelmerdine (Ross Shelmerdine’s son) would see a new architect brought in “with a view to having the memorial on the hill above the beach”.

He said talks were ongoing with Parks Victoria and in-principal discussions had been held with Flinders MP Greg Hunt and Environment Minister Josh Frydenberg as well as “the relevant government people”.

“They haven’t given any commitment but have shown a great deal of interest. Josh Frydenberg and Greg Hunt are both keen.”

Mr Lee was expecting the politicians to make an announcement at the site of the present unprepossessing Holt memorial on the 50th anniversary of his disappearance.

He said there was no cost estimate at this stage, but thought the project was “good for both state and federal governments”.

The sketch of Robin Boyd’s vision for a memorial at Cheviot Beach featured in a 2011 exhibition at the Mornington Peninsula Regional Gallery, Expressing the Human Spirit – Boyd’s Peninsula Houses.

The sketch was tagged “unbuilt” and markedly stood out from the houses which made up the remainder of the exhibition.

The two straight walls – concrete breakwaters – taper towards each other from the beach with a 25 centimetre gap at their apex. The equilateral triangle formed by the walls and the beach would create an enclosure of “safe, calm water”.

“The calm water is symbolic of peace; the narrow head which the walls form is symbolic of Australia’s turning outwards, under Mr Holt’s leadership, towards her neighbours,” a paper promoting an updated version of the memorial produced by the Robin Boyd Foundation states.

“The proposed memorial was presented to Governor-General Lord Casey and former Prime Minister Sir Robert Menzies who were both enthusiastic.

“The project proposal did not receive the support of the Prime Minister John Gorton and so it did not proceed.”