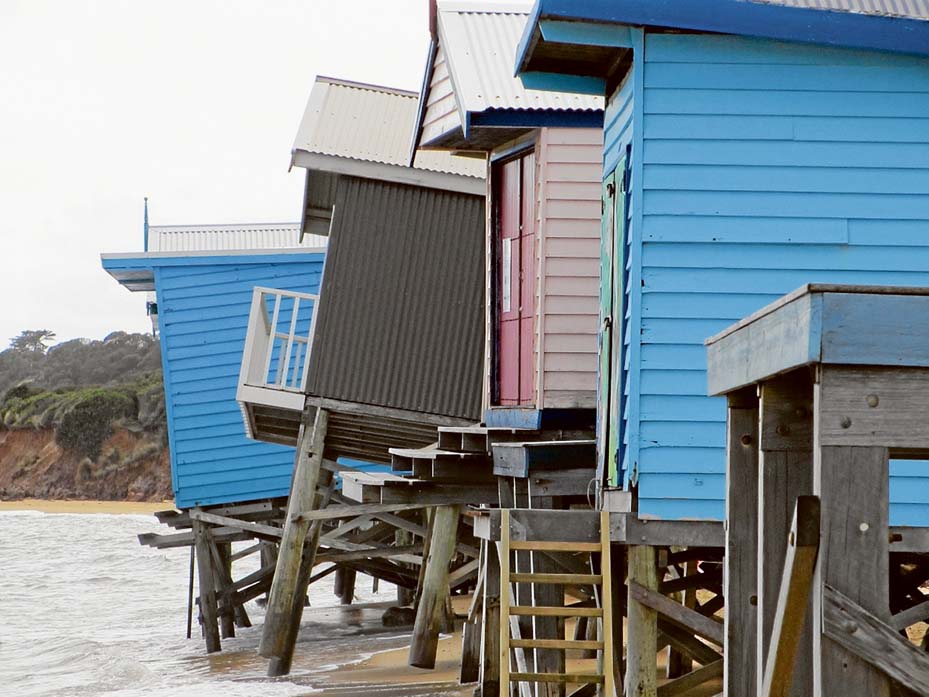 STORMS left bathing boxes at Mt Martha with some strange angles. Mornington Peninsula Shire issued notices for three to be demolished and others to be repaired within “liberal” timeframes. Further along the beach Aboriginal middens are also succumbing to the ongoing erosion.
Share
Facebook Twitter LinkedIn Pinterest Email

BEACH users, beach box owners and residents will next Saturday be presented with options for combating the sand loss and cliff erosion that has led to the closure of Mt Martha north beach.

A study into the latest erosion that came on the back of two severe storms in winter 2016 has found that the crumbling cliffs threaten the stability of the Esplanade.

The problems at the beach and possible remedies are contained in a report prepared for the Department of Environment, Land, Water and Planning by consultants, Water Technology (“Beach ‘repairs’ could cost $4m” The News 31/10/17).

Options costing up to $4 million include building rock walls and groynes across the beach or an offshore breakwater to slow the loss of thousands of cubic metres of sand needed to “renourish” the beach.

The department will hold a public meeting to discuss the “coastal modelling study” at 10.30am Saturday 25 November at Mt Martha Lifesaving Club.

“Two severe storms in winter 2016 noticeably eroded the already narrow beach at Mt Martha north. These storms, combined with persistent north westerly wind-driven waves, resulted in significant loss of sand on the beach which has not yet recovered,” Ms Philippou said.

“The study was completed to understand the history of storms, wind, waves and sediment transport at Mt Martha.”

In 2010, sand from the beach at Mt Martha south was used to replace that lost on its northern extremity.

However, it took just three years for the 12,500 cubic metres of sand to wash away and beach box owners in the south are likely to oppose any moves to repeat the failed operation.

Beach boxes in the south are in short supply and the most modest ones can sell for more than $300,000 – a price likely to rise if boxes at Mt Martha beach north are removed.

Mornington Peninsula Shire has condemned some of the existing boxes.

As well as public safety, other factors influencing works to stabilise the beach include the presence of Aboriginal middens; rising sea levels; and the consultants’ conclusion that artificial beach protection structures elsewhere have caused, or increased, the beach and cliff erosion. The report warns that by 2040 sea level rises “will make this a difficult location to maintain a beach”.

The closure effectively blocks access to a leash-free area for dogs, 50 boatsheds and paths from the Esplanade leading to the beach near Augusta and Alice streets and Coolangatta Rd, Mt Martha.