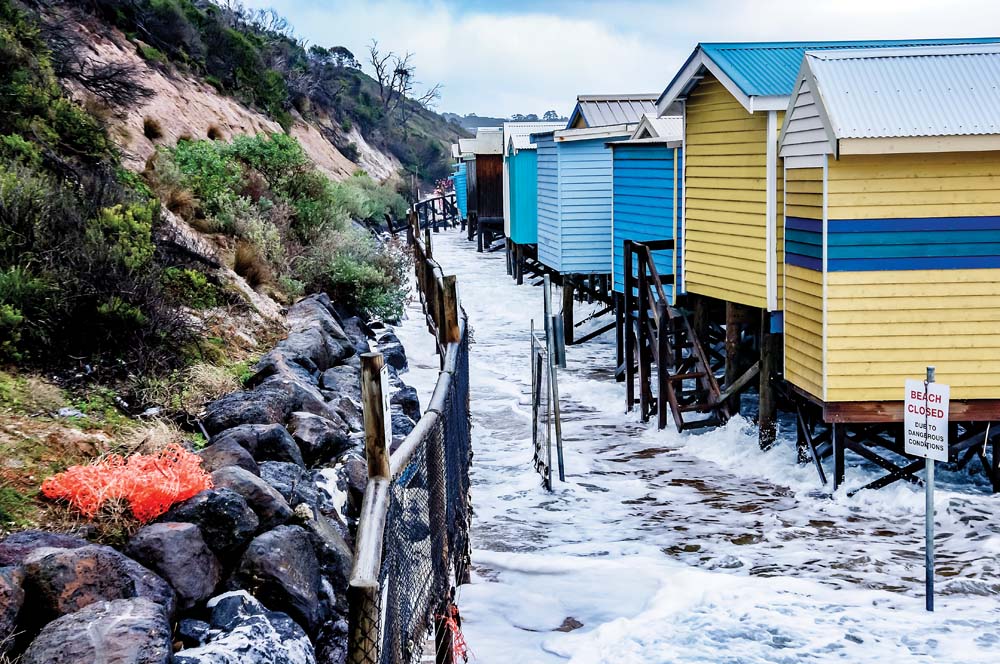 The Department of Environment Land, Water and Planning (DELPW) says about 150 cubic metres of sand will be used to fill a “sand tube” of geotextile fabric to be placed between the crumbling cliff and beach boxes.

The tube will be held in place between two lines of rocks which, in turn, will form part of a rock revetment, designed to be a more permanent solution to the cliff erosion.

Authorities fear that the eroding cliff will eventually threaten the stability of the Esplanade.

The beach has for years been subject to severe erosion, losing sand over the winter and seeing beach boxes undermined by the sea.

At least five have been demolished over the past year and another half a dozen are either leaving against one another or sagging on their foundations.

When built, the beach boxes were close to the foot of the cliff but are now some metres away due to the erosion.

Signs say the beach is closed due to the unstable cliffs.

The costs of retaining the beach and protecting the cliff  – $880,000 at this stage – have revived calls from Port Phillip Conservation Council for the beach boxes to be permanently removed from the beach (“Call for beach boxes to go” The News 12/2/18).

In 2010, 12,500 cubic metres of sand was moved from Mt Martha South Beach to Mt Martha North but little remained after three years.

The Mt Martha North Beach Group, which sees the planned works as going only “some way towards solving our problems”, says a 25 metre long rock groyne north of the beach will prevent further loss of sand. Consultants have put a $330,000 price tag on the groyne (“Call to make a point” The News 5/12/17). Other remedies suggested in a July 2017 report by Water Technology cost up to $4 million.

While there are no set sand levels for sand at beaches “there has been a considerable net gain at Mt Martha South”.

“We have recently carried out surveys of both beaches to determine the sand levels, and are confident that either beach can easily cope with the small amount of sand removal (150 m3) that is required for the temporary works,” Ms Philippou said.

“The design for the permanent rock revetment at Mt Martha Beach North is expected to be complete by late August. Construction is anticipated to begin in the first half of 2019.”

The department’s land and built environment program manager, John Downs said most erosion of cliff faces around Port Phillip “is largely caused by wave erosion at the toe of the cliff” rather than run-off down the slope.

He said it was “unlikely” that any loss of vegetation between the Esplanade and toe of the cliff “is having a significant impact on cliff erosion and the geotechnical conditions at Mt Martha North”.

“The geotechnical assessment for the Mt Martha North site is still underway and the full analysis, report and recommendations for the revetment design have not yet been provided to DELWP,” Mr Downs said.

“However, current advice to DELWP from geotechnical engineers is that they don’t believe run-off is a major factor causing erosion or destabilisation of the cliff at this site.”