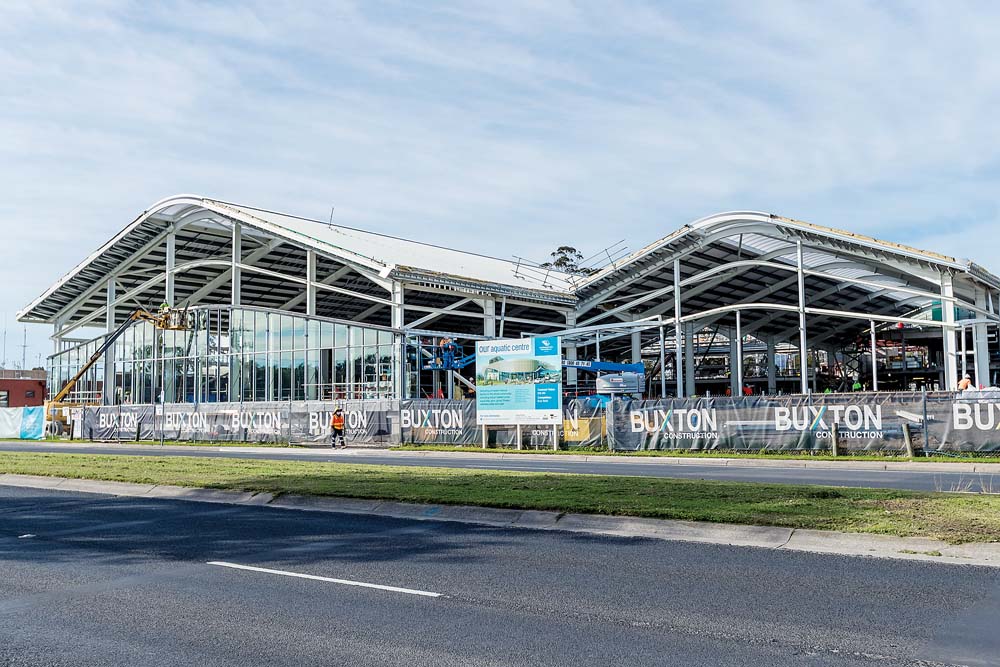 AFTER treading water for months, Mornington Peninsula Shire councillors are expected to choose Yawa as the name of the $50 million aquatic centre being built at Rosebud.

The Indigenous name meaning “to swim” came first in an online public poll run by the council.

The decision to choose an Indigenous word follows months of debate and has cost an estimated $200,000 in delays and extra work for shire officers and consultants.

Reacting to a vocal and seemingly powerful lobby group that wanted the name Rosebud Aquatic Centre, councillors in May deferred choosing an Indigenous name and instead sought further public comment.

That decision was made on National Sorry Day (Tuesday 26 May) and on the eve of National Reconciliation Week (“Shire’s ‘ugly’ Sorry Day decision” The News 1/6/20).

However, “Rosebud” may get a mention when activity areas within the aquatic centre are named.

Three other names – Barbawar, Gunawarra and Tides – may also be used within the centre.

Yawa Aquatic Centre came first with 18,379 votes (2066 more than any other of the five short-listed names) in a public poll run by the shire.

“This name aligns with the naming criteria as it is unique, memorable, positive and has endearing qualities,” sport and recreation operations project manager director – place, Amy Frost said in a report to councillors at their Tuesday 28 July meeting.

“The preferred name, Yawa Aquatic Centre, has strong links to the local area and celebrates local Indigenous language and culture.

“The community commented that Yawa Aquatic Centre is simple, easy to say, spell, remember and reflects one of the main activities at the centre ‘to swim’.”

In December 2019, the shire hired consultants Studio Binocular to help name and brand the aquatic centre, including seeking suggestions from the public, establishing a naming panel, running a naming workshop and then a review group. The findings were then to be given to councillors to decide.

Public suggestions were called for on 3 February with a Have Your Say survey and resulted in 442 submissions along with opinions from the Bunurong Land Council and Boon Wurrung Foundation. Geographic Names Victoria cautioned against using “Peninsula” or “Rosebud”.

After deducting duplications and already-used names, 114 suggestions were handed to the naming panel. A series of votes by panel members saw the list pruned to 40, then 17, then 13, then five, with Yawa “agreed as the preferred name”.

Councillors were given the outcome on 17 March and, at a workshop on 30 April, agreed to a short list of three: Barbawar (stingray), Gunawarra (black swan) and Yawa (to swim).

Fast forward to 26 May, when councillors, instead of voting on the three Indigenous names, at the suggestion of Cr Antonella Celi decided to again seek public comment, this time with the added “Rosebud” and “Tides”. In the final tally, Yawa was more than 2000 votes ahead of second choice Gunawarra and more than 3000 ahead of Rosebud.

Ms Frost said Yawa (to swim) would enable the community to “instantly understand the connection between the Indigenous word and the centre”.