‘Emphatic no’ to gas plan 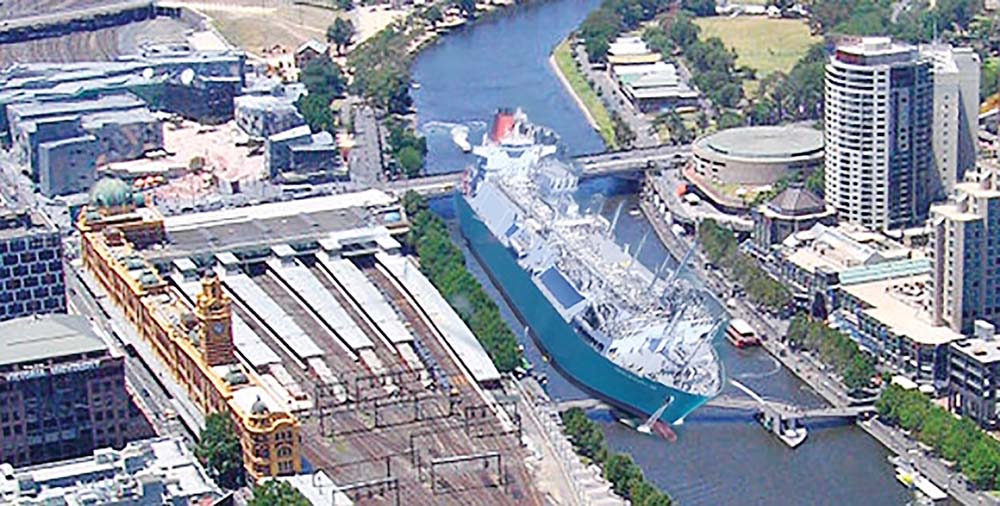 OBJECTORS to the floating import gas terminal proposed by AGL say that its nearly 3000 metre length and 40m height would dwarf anything In Western Port and have created this image to compare it to central Melbourne’s Flinders Street Station.
Share
Facebook Twitter LinkedIn Pinterest Email

MOST of the more than 2000 Mornington Peninsula residents who voted in an online poll are opposed to power company AGL’s plans for a floating gas import terminal at Crib Point.

The one-week poll held by Mornington Peninsula Shire showed 1932 (93 per cent) residents were against the plan compared to 131 being in favour.

The poll results follow the shire’s own opposition to the plan and the long running anti-gas terminal campaign by community group Save Westernport.

“This emphatic response [through the online poll] from our community aligns with council’s position that the project poses an unacceptable risk to the environment for unproven economic and resource gains,” the mayor Cr Sam Hearn said. “The result also supports the feedback we’ve received expressing significant concern about environmental impacts and the over industrialisation of Crib Point.

“The community and council are in lock-step on this issue – we don’t want the AGL project to proceed.”

Submissions regarding AGL’s environmental effects statement have now closed and the final decision on the gas terminal will be made by the state and federal governments.

Councillor Kate Roper said: “The combination of Ramsar wetlands, migratory bird habitat, the UNESCO Western Port Biosphere Reserve and our special marine and coastal environment all add up to a unique mix of elements far too valuable to risk.”

Cr David Gill said the state government should “finally listen to their community and scrapped this project before serious damage is done to Western Port, tourism, the fishing industry and people living and working at Crib Point”.

He said the proposed pipeline from Crib Point to Pakenham would jeopardise the viability of farms “and essential food bowl products”.

Save Westernport says “record numbers” of Victorians lodging submissions against the EES include Australian Doctors for the Environment and Westernport Peninsula Protection Council.

“Exact numbers have not been made available by the Department of Environment Land Water and Planning, but Environment Victoria estimates that well over 10,000 people made use of their online resources, and we’re aware of many thousands more who made a submission against AGL’s plans,” the group’s president Candy Van Rood said.

In October, a panel selected by the Planning Minister Richard Wynne will hear expert witnesses from the community and AGL via video link due to COVID-19 restrictions.

Ms Van Rood said Mr Wynne had decided to go ahead with the hearings “without explaining the need, or urgency of proceeding with this untested format” (“Calls to postpone debate over gas plan” The News 21/7/20).

“People who wrote a submission will have to remotely address the Panel with their concerns about the proposal and the environment effects statement that AGL took two years to prepare,” she said.