Car park is not a work in progress 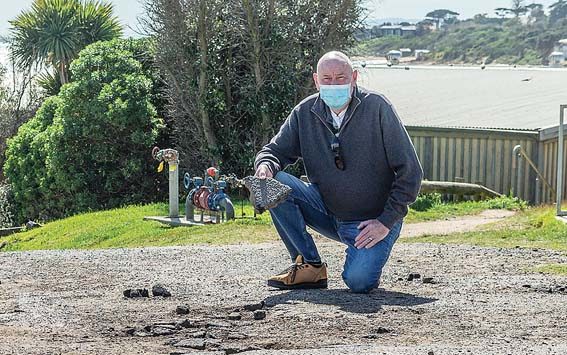 THE outgoing commodore of the Canadian Bay Club at Mount Eliza says he has been unsuccessfully fighting for years to get Mornington Peninsula Shire Council to resurface the public car park.

Grant Haworth says the shire had obfuscated on the necessary works for “five or six years”.

“Yet during that time they hypocritically demanded that the club resurface its driveway to make it safe at a cost to the club of $3500,” he said.

Mr Haworth said the car park surface is so bad that older members have complained they would not be renewing [memberships] because they felt unsafe on their sticks and walkers getting from their cars to the club entrance.

“They’d like to use the facilities here but they’re scared of falling in the car park,” he said.

The complaints follow those of Mt Eliza Association for Environmental Care which called the car park and road leading down to Canadian Bay beach a “disgrace” (“Push for better beach access” The News 4/8/20).

The association wants the council to quickly implement its Mount Eliza Coastal and Marine Management Plan which recommends upgrading the road, car park and picnic ground.

Mr Haworth said when the club was submitting plans for new buildings six years ago, he was shown council plans for the car park upgrade and “we’ve got nowhere since then”.

He said the club would prefer to have all of Canadian Bay Road resurfaced, not just the car park.

“It gets very busy in the car park during summer, yet it must be 30 years since the road has been done.”

The shire’s coastal planner Laura Crilly said recently that the 2004 Mount Eliza Foreshore Reserve Management Plan had recommended updating the Canadian Bay car park and picnic area and that “funding for the completion of the new coastal and marine management plan is included in the 2020/21 budget.” Although the new plan would include the car park upgrade as a “key action” no money had been included to design or construct it.