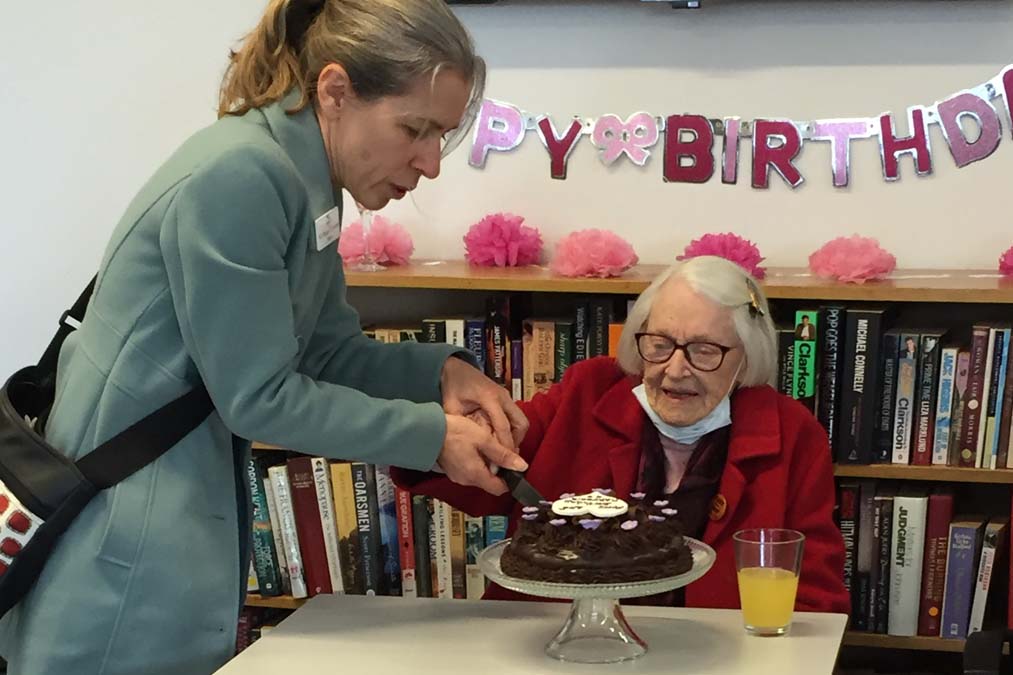 A WOMAN described as a “national treasure” has celebrated her 100th birthday at Somerville Community House.

Marjorie Darling Ward was surrounded by family, friends and the Mornington Peninsula’s writing community to celebrate her birthday, career and contribution to the arts, Saturday 10 July.

“Of course, Marjorie is more than just a writer,” Rob Clarke Mornington Peninsula Writers said. “She is, or has been, a wife, a mother, grandmother, and great-grandmother. She’s also been a one-time working partner on three country newspapers, hotelier, Riverina farmer, real estate agent, and so much more beside.”

Ms Ward has written fiction, non-fiction, poetry and stage plays. Her work has been featured in the Herald and Weekly Times, The Age, Westerly, Melbourne Times, New Idea, Woman’s Day, Women’s Weekly and been read on ABC Radio National.

In 1994, Ms Ward published Singing the Country for the Tamworth Country Music Festival. “It tells the stories of the journeymen performers, buskers, small-timers in the parks, on the streets, away from the bright lights,” Mr Clarke said. “Music would be a theme Marjorie would return to time and time again. And, as many writers can attest, supporting creative talent—no matter where they were on their journey—would also become her trademark.”

The autobiographical love story, Cast a Pebble in the Ocean was published in1995 and described as a “charming little Australian gem”.

Her next novel, 2010’s Things You Can’t Leave Behind, touched on obsessive love, survivor guilt and conflict.

In 2011, Ms Ward published the anthology, Cry Me A River in which each piece was inspired by a song. She said upon its release: “Our emotions are influenced by our music choices and certain songs mark milestones in our lives.”

The musical theme continued in 2012 with Three Chords and the Truth, about three musicians travelling through the Australian landscape in search of themselves. In 2015, Ms Ward released the whodunnit, Twenty-Six Sheilas on a Bus and Murder Most Foul. In 2018 came an anthology of selected poetry, The Quilted Woman.

Ms Ward’s work graced the pages of numerous editions of Stories and Poems from the Mornington Peninsula, and no edition of the Frankston Writers Block Anthology is without one of her contributions, Mr Clarke said.

Her Soliloquist, an anthology of performance pieces, was published by Melbourne Shakespeare Society in 2013, and she had two poems in City of Stars, an anthology of love poems for Frankston, published in 2015. The Port Phillip Prisoners anthology, That Summer and Other Stories, was released in 2018.

Another work was a pantomime commissioned and performed by Tumut Performing Arts Society, and her stage plays Xmas Rapping, and The Whipping Act, was part of the International Women Playwrights’ Conference 2000. It was awarded the runner-up award in the annual Kyneton Festival of Plays in 2019 and was performed at Mount Macedon Theatre in 2020.

Mr Clarke said while Mrs Ward’s body of work was “impressive, it can never truly show her love of community; her support and nurturing of her fellow writers”.

“She was always first to meet and greet a new member to the writing group, and make them feel welcome. And her support didn’t end there. She was continually offering advice and sharing her vast pool of knowledge.

“For anyone who has had the good fortune to call Marjorie a friend or colleague, there can be no doubt that she is deserving of the title ‘national treasure’.”

Mr Clarke said the obligatory speeches were upstaged by the recital of poetry, one written by the guest-of-honour for the occasion and read by her son Glen.

MISSING
By Marjorie Darling Ward
I looked for you
in the places you spoke of
all summer long
but the stars denied
you had been there
The ocean, busy with its tides
could not tell me
I sought your footprints
in the fields
but the wind had blown them away
I followed ribboned rivers
to where the land ends
and found you not
I took a lamp to look
into my own darkness
and found you there
The one place
I should first have looked