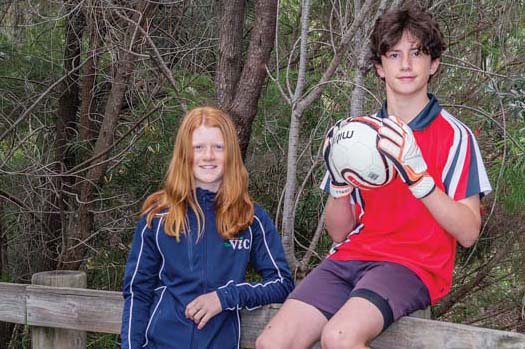 Stars in the making: Tilly Boadle and Jack Barnet will put their soccer skills to the test when they play in School Sport Victoria teams next month. Picture: Gary Sissons
Share
Facebook Twitter LinkedIn Pinterest Email

TWO Mount Martha students have been selected to play in School Sport Victoria’s 12 years and under soccer teams in NSW next month.

Jack is goalie in the boys’ team while Tilly plays attacking midfield in the girls’ team.

“Jack plays for the Mornington Soccer Club in the under-12s and has been selected in the school sport team as the goalkeeper,” she said.

Tilly was introduced to the sport at Mount Martha Soccer Club when she was six and played with the boys for five years.

COVID-19 lockdowns meant she could not start training until this month, her mother Stef Boadle said. “We are all so pleased they finally get to play.”

“This is a significant achievement for Tilly and the Mornington Peninsula,” Ms Boadle said. “A very big commitment lies ahead, with training three times a week in Melbourne and one NPL match every weekend.”

The extra commitment will no doubt inspire Tilly. “She is very active and loves mountain biking and surfing, just as much as soccer,” Ms Boadle said.

Ms Rodwell said many past School Sport Victoria players had gone on to compete at national and international competitions, including Olympic Games, world championships and Commonwealth Games.

“Here’s hoping Jack and Tilly and their Victorian teammates can achieve their personal goals and possibly represent Australia in the years to come,” Ms Rodwell said.