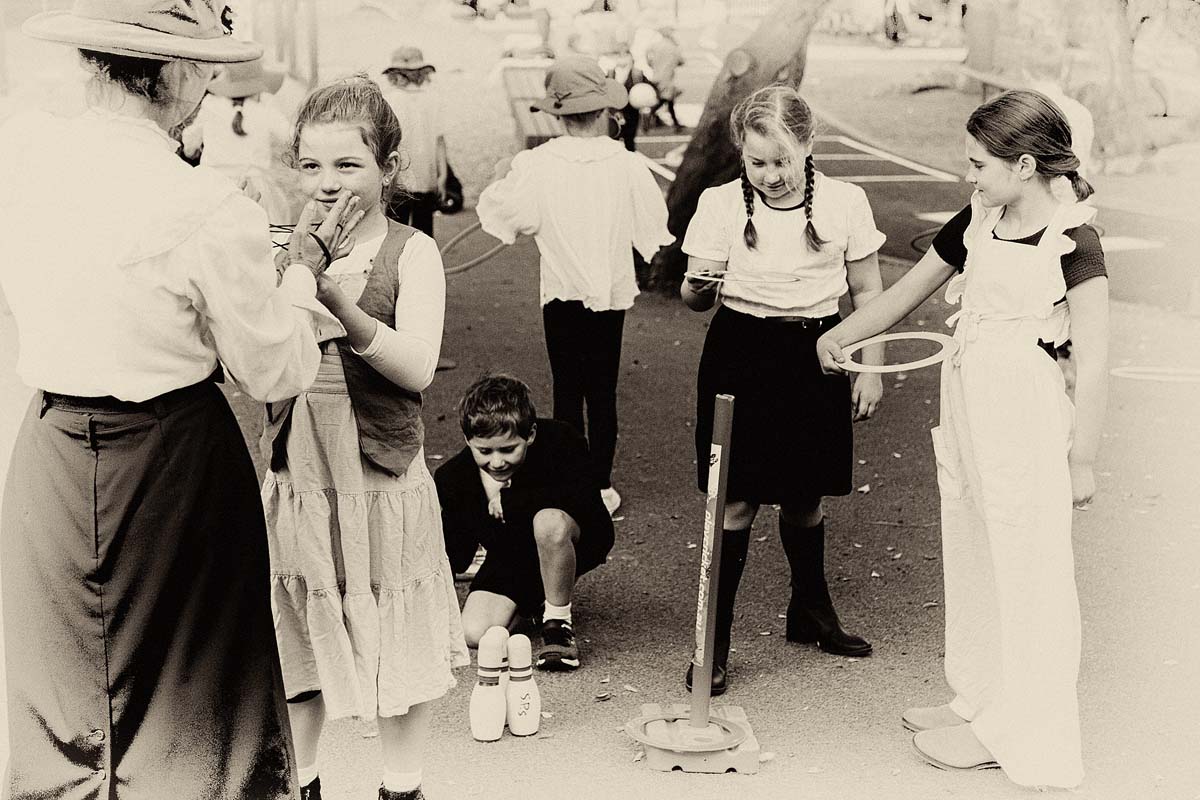 SEVENTEEN past students were back at Sorrento Primary School on 1 December as part of its 150th anniversary celebrations – some being amazed at changes to buildings and grounds.

“Many memories were shared,” principal Meg Dallas said. “Including how trenches were dug for World War II.

“One visitor remembered jumping over the Norfolk pine at the front gate in the 1950s – making it over 70 years old.”

“Those who attended the function enjoyed a trip down memory lane and will be sharing further information about the school with the society,” Ms Dallas said.

Last week, students and staff entered the spirit of the “olden days” by dressing up and taking part in activities linked to the history of the school and illustrating how education was conducted then.

They played old fashioned games, ran relay, egg and spoon, and sack races, learned calligraphy, and took part in a radio show and a past students’ reflections event.

Here is how Nepean Historical society described education at the southern end of the peninsula in the years leading to the establishment of Sorrento Primary School No 1090: “In 1855 in a tent in Franklin Road, Portsea, nine boys and two girls attended a Church of England school which closed at the end of the year.

The next year a national school opened on the site of the present Portsea Hotel with 15 pupils. It closed in 1861 and, for 10 years, there was no school in the area, with a sizeable minority of residents being “apathetic about education.”

Eventually, thanks to the efforts of concerned parents, Common School 1090 opened in an existing house at 3557 Point Nepean Road on 18 September 1871 – halfway between Sorrento and Portsea. It was possibly of wattle and daub construction with a brick well at the rear.

This was the predecessor of Sorrento Primary School in Kerferd Avenue.

The initial enrolment of 30 boys and girls aged four to 16 increased so quickly that in 1890, a new school was built and the old one became the teacher’s house.

Within four years the school building proved inadequate as the closure of Portsea School 2929 led to 32 ex-pupils enrolling at the Sorrento school.

The inspector’s report of 15 October 1900 stated: “The school is inconveniently crowded with furniture and all the classes (averaging about 85) have to be taught in one room.” The pressure was relieved by adding another room.

With the population increasing after World War I new schools were built at Portsea and Sorrento, with both opening in January 1925.

Most of the students began the year at Sorrento School No 1090 in Kerferd Road, where Harry and Keith Redman had built three classrooms and an office. Over the years the present school expanded around this original building.

Sorrento Primary School officially turned 150 on 16 September, but due to COVID-19 the celebrations were postponed until last week.

A book celebrating 150 years of education at Sorrento Primary School will be published next year.