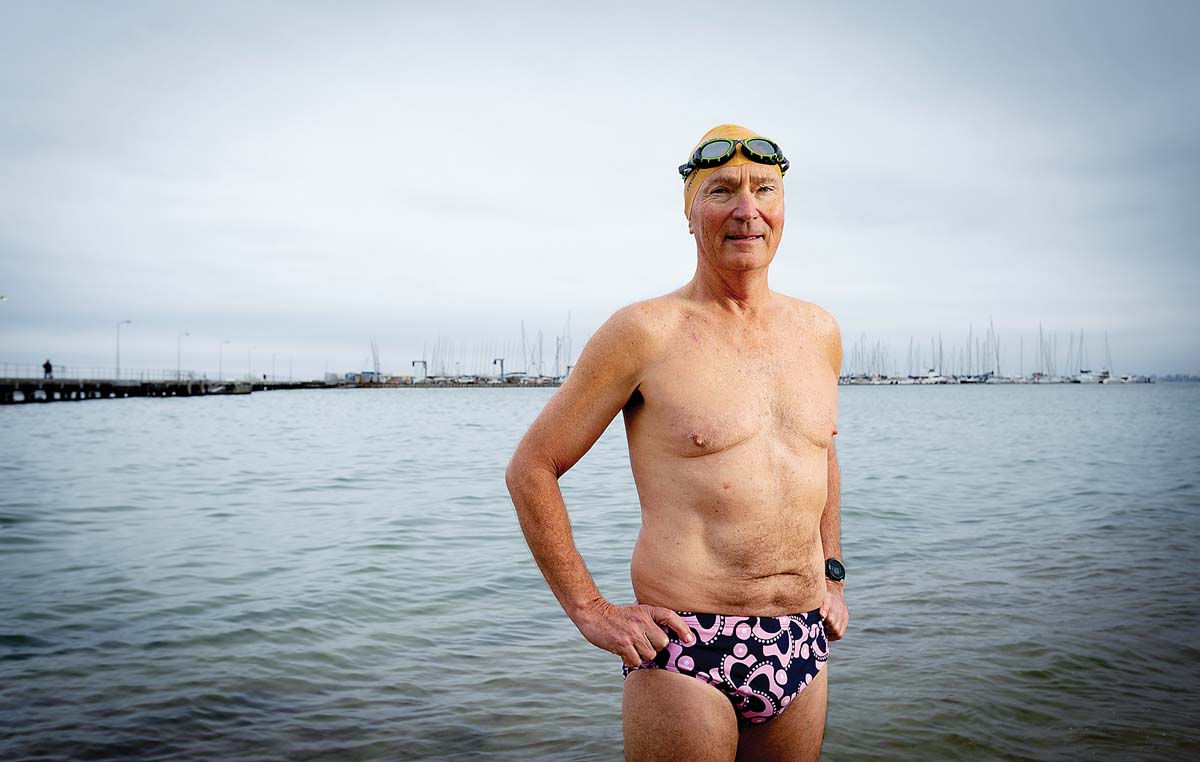 DESPITE his modesty and unassuming demeanour, Mornington Peninsula-based swimmer Chris Yencken is something of a legend in swim circles.

At 66 and boasting a level of fitness many men half his age would envy, the retired banker is gearing up for his 36th Portsea Swim Classic, an event he has participated in every year since its inception in the 1980s.

Yencken first took to the sport of swimming at three, when his mum enrolled him in swimming lessons at Sorrento baths. He has barely spent one day out of the water since and is now a regular competitor at swim events from the peninsula to the surf coast.

It’s still a challenge he enjoys, but not one that is too physically taxing any more.

“I wouldn’t say I find the race difficult, it’s quite an easy swim for me that I can do in about 15 minutes, but it’s always fun,” he said.

There’s also an added attraction to the race for Yencken, with his adult sons also regular participants – prompting a little friendly rivalry banter from all three.

“Yes, there’s a bit of competition that goes on, but I can already beat my youngest son, who is 31, and most probably this year my 33-year-old son because he’s lost of bit of fitness,” he said.

“But It’s all in good fun and we really enjoy it.”

Not one to rest on his laurels, Yencken does the 1.5km classic as well as the 2.5km gold event that precedes it, and during the year participates in other swim events around the coast, including at Point Lonsdale, Point Leo, Anglesea, Edithvale and Bonbeach.

Every day, no matter the weather, he joins mates at Portsea for a morning swim, something he was able to continue throughout lockdowns because he lives nearby, and the group could spread themselves out to manage social distancing requirements.

It’s clear swimming is keeping Yencken fit and healthy in his retirement years, but he says it’s also an excellent sport to relieve stress and improve mental alertness.

Barring any COVID-related cancellations, he’ll be doing it all again on Saturday (15 January), along with thousands of other participants who have discovered the challenges and benefits of competition swimming.

This year a new Portsea Bay to Surf Adventure Run will add an extra element to the weekend, with twilight runs and a walk through Point Nepean National Park on the day before the swim to create a two-day Portsea Classic.

The 36th Portsea Swim Classic will be held at Quarantine Station in Point Nepean National Park, and includes the two races as well as the 500m junior swim for 7-11 year olds, the all-female 500m relay for teams of three, and the Dash 4 Cash sprint.

The classic is volunteer-led by members of Portsea Surf Saving Club and is the club’s major annual fundraiser.

In the Bay to Surf 1000 competitors will tackle one of three events, a 4.5km walk, a 4.5km run or a 9km run through the national park. The 4.5km adventure walk starts at 6.15pm from Jarman Oval and finishes at Portsea Surf Life Saving Club. This will be followed by the adventure runs.

Club president Matt Mahon said the club was excited to be able to offer a safe and expanded event after a challenging 18 months.

“Lifesaving plays a crucial role in local communities and protecting swimmers at our beaches. With limited swimming lessons and water play for children due to the global pandemic, never has it been more crucial to ensure our beaches are safe this summer,” he said.

As in 2021, the Portsea Swim Classic will be conducted in a COVID-safe manner including QR code check-ins.

The 36th continual running of the Portsea Swim Classic will be held on Saturday 15 January 2022. Registrations close Wednesday 12 January 2022 at portseasurf.com.au/portsea-swim-classic/