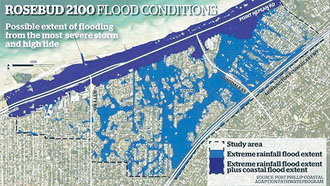 TOWNS and suburbs on Port Phillip including Rosebud and McCrae could be submerged by coastal flooding combined with heavy rain events by the end of the century, says an unpublished confidential report.

The existence of the report was revealed after Mornington Peninsula Shire councillors held a private meeting on 24 September.

This was after the public gallery was cleared at the end of the final public meeting before the council went into caretaker mode in the run-up to last Saturday’s election.

The equipment used to tape open meetings was accidentally left running and captured the private meeting.

Four sound files of the meeting were then posted on the shire’s website with­out being checked.

The fourth file contained the private meeting at which councillors and senior shire officers, including CEO Michael Kennedy, discussed what the council would say if the report was leaked or made public by the federal government or the Municipal Association of Victoria.

The government and MAV are joint sponsors of the report, which warns bayside areas face huge damage bills after big storms and rising sea levels.

A map in the report, due to be released in February, shows flooding in large areas of Rosebud between Jetty Rd and Lonsdale St, and parts of McCrae east of Lonsdale St.

This would occur during a “perfect storm” of coastal flooding combined with heavy rains when stormwater would not run into Port Phillip.

The damage bill could be many millions of dollars a year by 2100 from these extreme conditions – $20 million at Southbank, $15 million at Elwood, unknown millions at Mordialloc and $100 million at Rosebud-McCrae.

The report has a cost-benefit analysis of whether to “retreat” or “adapt” as sea levels rise and storms increase.

Landowners in NSW and Queensland are being told by climate experts they should consider retreating from the coast as storm surges from the Pacific combined with high sea levels threaten coastal communities.

NSW has 15 “hot spots” including Batemans Bay, Collaroy and Byron Bay while Queensland has more, including the Gold Coast, Caloundra and Noosa Heads. Places like the Gold Coast and Noosa have battled erosion for many years, but the rate has increased in modern times.

The report urges Port Phillip’s flood-prone communities to “adapt” as the cost of “retreat” would be far greater.

Last year the federal government’s climate change unit said 250,000 coastal homes worth more than $60 billion were at risk of flooding from sea rises over the next 90 years.

Although the study covered Rosebud and McCrae, many other parts of the peninsula on both Port Phillip and Western Port would be at risk.

PROJECTIONS of global sea level rise have become more pessimistic over the past five years.

In 2007, the United Nations Intergovernmental Panel on Climate Change predicted a rise of more than one metre by 2100. In 2009, the Delta Commission of the Dutch government projected up to 1.10 metres as a “high-end” scenario.

In the same year, the Scientific Committee on Antarctic Research (SCAR) projected up to 1.40 metres.

The more pessimistic views are based on a number of observations, most importantly that sea level has been rising at least 50 per cent faster in the past decades than projected by the IPCC in 2007. Also, the rate of rise averaged over two decades has accelerated threefold, from about one millimetre a year at the start of the 20th century to about three millimetres a year over the past 20 years.

“Right right now $3 trillion worth of property and 40 million people are exposed to expected sea level rise. By 2070 those numbers become $35 trillion (roughly 9 per cent of forecast world GDP) and 147 million people,” he said

“There is a 74 per cent chance of one or more of the world’s low-lying cities being impacted by a once-in-a-century event every year.”

Americans on the east coast have just experienced that 100-year storm.

AT the private council meeting on 24 September, councillors and senior shire officers wrestled with the threat of the Port Phillip Coastal Adaption Pathways Program report being leaked to the media or released by the federal government or Municipal Association of Victoria during the council caretaker period.

The meeting – accidentally recorded and posted on the shire’s website – revealed shire CEO Michael Kennedy telling councillors they needed to prepare a response before going into caretaker mode as they would not be able to comment during the 32-day “blackout” period.

Senior planner Allan Cowley told councillors the report did not recommend retreat from Port Phillip, unlike in NSW and Queensland where it was being suggested, which had triggered strong reactions in communities.

Director of Sustainable Infrastructure Alex Atkins, who had just returned from a week interstate with coastal planners and climate change researchers, said it was “comforting to hear a lot of councils around Australia are dealing with these issues”.

He said councils were learning from early engagement with communities, and cited the shire’s 2009 Climate Change Conversations – when 3000 residents attended 11 meetings across the shire – as a model of dealing with community expectations.

Mr Atkins said it was important to get climate change information as early as possible and make it available to the community.

The council needed to explain to people what the Port Phillip Coastal Adaption report was saying, what the council understood it to mean and “bring the community along in terms of your decision-making”.

But then he criticised the media over climate change reports.

There was “clearly a lot of concern among people engaged in coastal management issues that the media don’t treat this issue well” and that “they tend to jump to extreme positions and seek to divide the community in terms of the way they report these matters and that’s leading to a lot of discontent among professional researchers and professional land managers”.

Cr Leigh Eustace said shire officers had read the report “but we [councillors] haven’t. We know nothing about adaptation plans” and he would not vote on the report before getting further information.

Cr Anne Shaw, the shire’s representative for several years on the Association of Bayside Municipalities, said the council had previously supported the “whole of bay approach” that was being promoted in the new report.

Cr David Gibb said the council supported “the whole of bay approach, adaptation, etc” and could give this to the media if the report came out during caretaker period.

CEO Michael Kennedy said it was a federal government report “that we don’t have the right to give to councillors”.

Cr Eustace said there would be significant costs due to damage.

Dr Kennedy: “We’ve shown the cost and benefit of retreat or adaptation.”

Cr Eustace said the AECOM report into the proposed Rosebud pool site that was due to be posted on the shire’s website had the Port Phillip Coastal Adaption report removed.

Dr Kennedy said the gap between the cost of retreat and adaptation was so great “it’s not a tough call”. Adaptation was the cheaper option. The Port Phillip Coastal Adaption report said it would cost $100 million to adapt “but we say it is less”.

Cr Shaw said if people don’t have the right information, they’ll be upset”.

Councillors then voted to accept a report that they had not read and to keep it confidential.