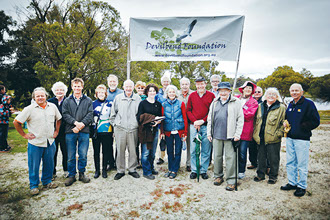 DEVILBEND Reserve was officially opened on Saturday, but the battle between environmentalists, government and fishing groups is far from over.

Controversially, there are two fishing platforms and the 14,600-mega­litre reservoir (an Olympic pool holds one megalitre) was stocked with 5000 brown and 5000 rainbow trout of “catchable” size by the Department of Primary Industries in September.

DPI secretly released trout fingerlings in the reservoir more than two years ago, many of which were eaten by native perch.

The Devilbend Foundation, a coali­tion of 35 peninsula, state and national environment groups representing 60,000 members and supporters in Victoria, has for more than 10 years been trying to dissuade the government from allowing recreational fishing in the reserve as well as horse riding.

The foundation has consistently said allowing recreational fishing would compromise the natural values of the reserve.

Former foundation president Roger Richards, also a member of Birdlife Australia, stated two years ago an Arthur Rylah Institute study commissioned by Parks Victoria that detailed the detrimental effects of stocking the reservoir with trout had been ignored by DPI.

Trout compete for the same invertebrate food as the endangered blue-billed duck and other vulnerable water birds at Devilbend, he said.

Competing interests of anglers and environmentalists were on display during the opening on Saturday.

As if to underline Devilbend Foundation concerns about reserve visitors affecting the flora and fauna “lifeboat”, at least one angler was ordered by a Parks Victoria ranger to leave a no-go area.

On Sunday a person in an inflatable dinghy was spotted on the reservoir, which is against reserve rules.

The Devilbend Foundation has call­ed on the state government to bring in tougher rules to police the reserve.

The News understands the rules are being drafted, but have not yet been approved by the Department of Sustainability and Environment.

On Saturday, Peter Walsh said: “This is the first time the public has had access to this site since it was formally transferred to the Crown in 2006, after the reserve was decommissioned as a water supply facility.

“As well as improving fishing access to the site, DPI has stocked the reservoir with brown trout and rainbow trout, boosting recreational fishing opportunities in time for the opening.

“This is a wonderful opportunity for the public to get out in nature and enjoy this great new reserve – and hopefully land a fish.”

Mr Walsh acknowledged the many stakeholders and community groups that had contributed to the planning of the reserve, including the Devilbend Foundation, the Friends of Daangean Point, Bunurong Land Council, VRFish, peninsula angling clubs and the Future Fish Foundation.

“The Devilbend Foundation and its affiliated community groups have campaigned for many years to ensure the planning would protect the natural values of the reserve,” Mr Walsh said.

Neale Burgess said visitors could enjoy direct access to the water’s edge with extensive walking tracks and a boardwalk.

“The area of the reserve available for park visitors to explore has increased sixfold, with an additional 30 hectares being opened up,” he said.

Long road: Top, some members of the Devilbend Foundation at the opening of the reserve on Saturday. The foundation has called for tougher rules to safeguard the flora and fauna in the 1000ha reserve. Right, Hastings MP Neale Burgess, left, and Water Minister Peter Walsh dangled rods in the reservoir from one of two new fishing platforms.