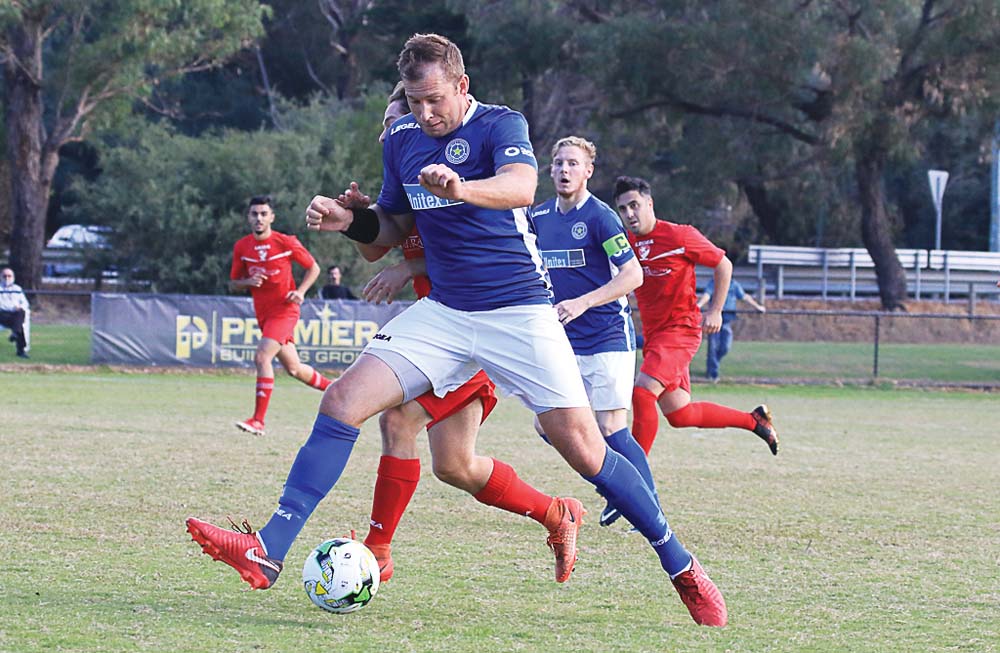 CALEB Nicholes made sure of Skye United’s first win of the season with an eight-minute goal blitz against Dingley Stars at Skye Recreation Reserve on Saturday.

The first half was a cagey affair with Skye dominating most of the possession and it was rewarded when Mitch Blake pounced in the box and finished well to give the hosts a half-time lead.

Nicholes opened his account two minutes into the second half when he tapped in from close range following Daniel Attard’s strike.

In the 52nd minute, a long ball from Saj Sugrim caught out the Dingley defence and Nicholes finished well then the big man completed his hat-trick in the 55th minute when he headed Jason Nowakowksi’s cross in off the post.

Dingley’s sole response came following a corner in the 60th minute when Teon Haywood found the back of the net after Skye failed to clear.

In State 1 South-East Mornington had to settle for a 1-1 away draw with St Kilda on Saturday.

Andre Bennett opened the scoring for Mornington in the 47th minute with a strike that took an awkward bounce and beat St Kilda keeper Remy Rey-Lescure.

But a handling error from goalkeeper Liam Little allowed Darragh Ryan to level from long range in the 73rd minute.

The reserves match was abandoned after an ugly melee.

Mornington continued its excellent FFA Cup run with a 2-0 win over NPL2 outfit Brunswick City at Comets Stadium last Wednesday night which takes Adam Jamieson’s men into round 6 of the Australia-wide competition.

Keegan Ziada opened the scoring in the 7th minute with a clinical first-time finish following a fine Sam Reeves ball into the near post and when Curtis Hutson was felled inside the area in the 27th minute Sammy Orritt converted from the spot.

Striker Max Etheridge has returned to England for family reasons.

In State 2 South-East it was the late, late show for Frankston Pines as they defeated Old Scotch 1-0 at Monterey Reserve on Saturday.

A left-foot volley from CJ Hodgson in injury time settled the issue and pushed Paul Williams’ side into the top half of the table with a game in hand.

The 2018 ambitions of Peninsula Strikers took a hit on Saturday night at Egan Lee Reserve when they went down 4-1 to Knox City.

The visitors’ prospects weren’t helped when star striker Femi Orenuga suffered a hamstring injury in the 22nd minute and was forced off.

The home team dominated the first half and it was game over at the interval with Knox leading 4-0.

Knox midfielder Grant Lane opened the scoring in the 15th minute with a well-struck volley from the right of the area.

Jordan Avraham increased the lead in the 37th minute with a firm low strike from the right of the box and two Matthew Hames goals in the final six minutes of the half sealed Strikers’ fate.

Strikers are believed to be in talks with a central defender and are hopeful of reaching agreement this week.

Harry McCartney reports that Seaford United’s horror run in State 3 South-East continued on Saturday with a 5-0 away loss to Whitehorse United.

Just when you thought things couldn’t get worse for Paul Pinheiro’s men the under-siege coach was forced to put Matt Morris-Thomas on the bench due to illness and lost star striker Dylan Waugh to a straight red card in the 11th minute.

Waugh had fashioned the best two chances of the opening exchanges before having his shirt grabbed by a defender and in swinging his arm back to free himself struck his opponent in the face.

Seven minutes later a handling error from Seaford keeper Ugur Erdem led to a Jason Alizzi own goal and a low strike from Nhan Than in the 25th minute made it 2-0.

Paul Tonis ended the rout in the final minute of normal time.

A superb Meiklem run down the left in the 14th minute ended with a cutback to Ernsdoerfer whose low strike from 10 metres opened the scoring.

Ernsdoerfer returned the favour 10 minutes later and Meiklem made it 2-0.

Noble Park was much more adventurous in the second half and Alessandro Stazio scored from close range to make it 2-1.

Ernsdoerfer sent in a low cross in the 64th minute which Meiklem struck against the post before hitting the rebound against the other post and in to make it 3-1.

In the 85th minute, the pair combined yet again as Ersndoerfer completed his brace.

Somerville led at half-time from a Dave Greening goal but the home side struck on the break in the 55th minute through James Bingham to make it 1-1.

Referee Batten had Somerville’s bench and supporters dismayed when fouls on Louis Griffiths and Greening only resulted in yellow cards with Greening hitting the bar from the free-kick awarded after he was brought down when clean through.

Poor defending from a corner in the 76th minute allowed Old Mentonians’ James Hawkes to bundle the ball home from point-blank range and Jacob Klein put the game out of the Eagles’ reach with a breakaway goal in the 88th minute.

The decisive moment came in the first minute of the second half when Lions’ striker Cameron Neales took advantage of Langy’s inability to deal with a set piece on the right and his side-foot volley gave Langy keeper Josh Dorron no chance.

Langwarrin’s under-20s went down 1-0 courtesy of a spectacular long-range strike from Robel Wondimu in the first half.

Five Langwarrin players have been selected in FFV’s Talent Identification and Development Centre squads from which the state underage squads are selected for the annual national championships.

Meanwhile, Southern United remains anchored to the foot of the NPLW ladder after going down 13-1 to South Melbourne at Monterey Reserve on Sunday, Southern’s goal coming from Olivia Groves who converted a first-half penalty.