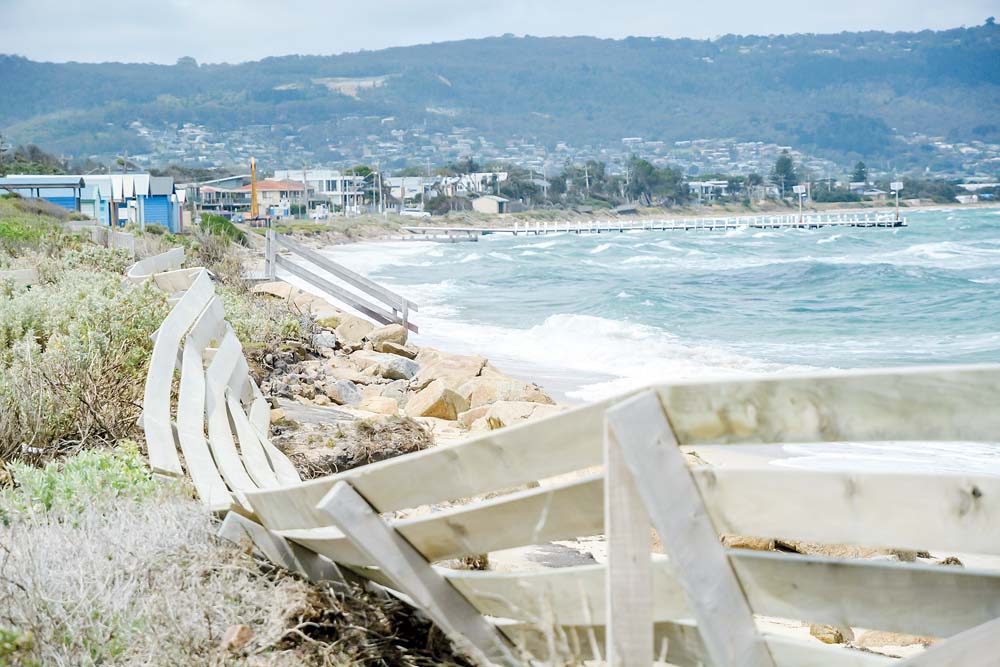 MILLIONS of dollars in taxpayers’ money is being spent restoring two Mornington Peninsula beaches despite experts being unable to find a permanent solution to sand loss.

At Portsea, heavy machinery is being used to build a rock wall to protect workers repairing a sandbag sea wall first installed in 2010.

At Rosebud, 20,000 cubic metres of sand will be dredged from offshore sandbars and used to renourish two beaches.

Rosebud West beach is impassable at high tide and beach boxes have been undermined while the Bay Trail boardwalk has been washed by waves east of the pier.

The exercise – paid for with a $1. 5 million election promise made by Flinders MP Greg Hunt – replicates a similar movement of sand in 2010, which was all but gone within three years.

DELWP last week said taking sand from end of Mt Martha beach to the other was “a short-term measure”.

The works would take three to four weeks and would start when money came through from the federal Environmental Restoration Fund.

Although heavy rocks have already been placed against the eroding cliff base at Mt Martha North, the most recent expert report commissioned by the state government could find no way to “restore sand or prevent erosion in the short or long-term along the entirety of the beach” (“Beach repairs could cost $4m” The News 30/10/17).

“The Victorian government had allocated funding to address erosion at Mt Martha North, and if any of the engineering options in the report had been found to be feasible and effective, they would have been implemented,” land and build environment programs regional manager Dick Ford  said.

In early November Mr Hunt said the state government was indicating it was willing to “reconsider its position” and would implement the replenishment program while developing a long-term plan (“Lifeline for Mt Martha North beach” The News 11/11/19).

A check of Safety Beach near Dromana last Thursday showed that it too was shrinking in width, although no government agency has yet offered any help.

Meanwhile, a big yellow digger continues to position rocks at Portsea for a temporary rock bund that will be removed when the sandbag wall was completed early next year.

Work is taking place Monday to Saturday but will stop before Christmas and throughout January and will restart at the beginning of February.

Land and built environment program manager John Downs said pedestrians could use the pier during the works and the beach could be reached using scaffold stairs until workers start removing sandbags or if safety becomes an issue.

The temporary bund was necessary because of damaging wave and weather conditions, combined with greater than anticipated sand loss in front of the sandbag seawall over winter.

“The sandbag wall was established in 2010 and has since helped protect the Portsea foreshore against the impacts of storm surges, waves, tides and wind,” DELWP Port Phillip regional director Stephen Chapple said.

“The outer layer of the wall is in poor condition as a result of wear and tear over time. The repair works will see the front face of the sandbag wall replaced to ensure it continues to provide protection to the foreshore.”

The shire at that time called on the state government to first find a solution to the disappearing sand which has receded 25-30 metres along 600 metres of beach.

The shire said a permanent rock revetment outlined in a 2016 study by consultants Advisian “by itself will achieve erosion protection but will not guarantee the return of this iconic beach”.

Two months later the state government postponed building a permanent rock wall which then-mayor Cr Bryan Payne dismissed as “the final environmental nail in the coffin [which would] permanently destroy the beach”. (“Restore our beach: council demands” The News 4/9/18).