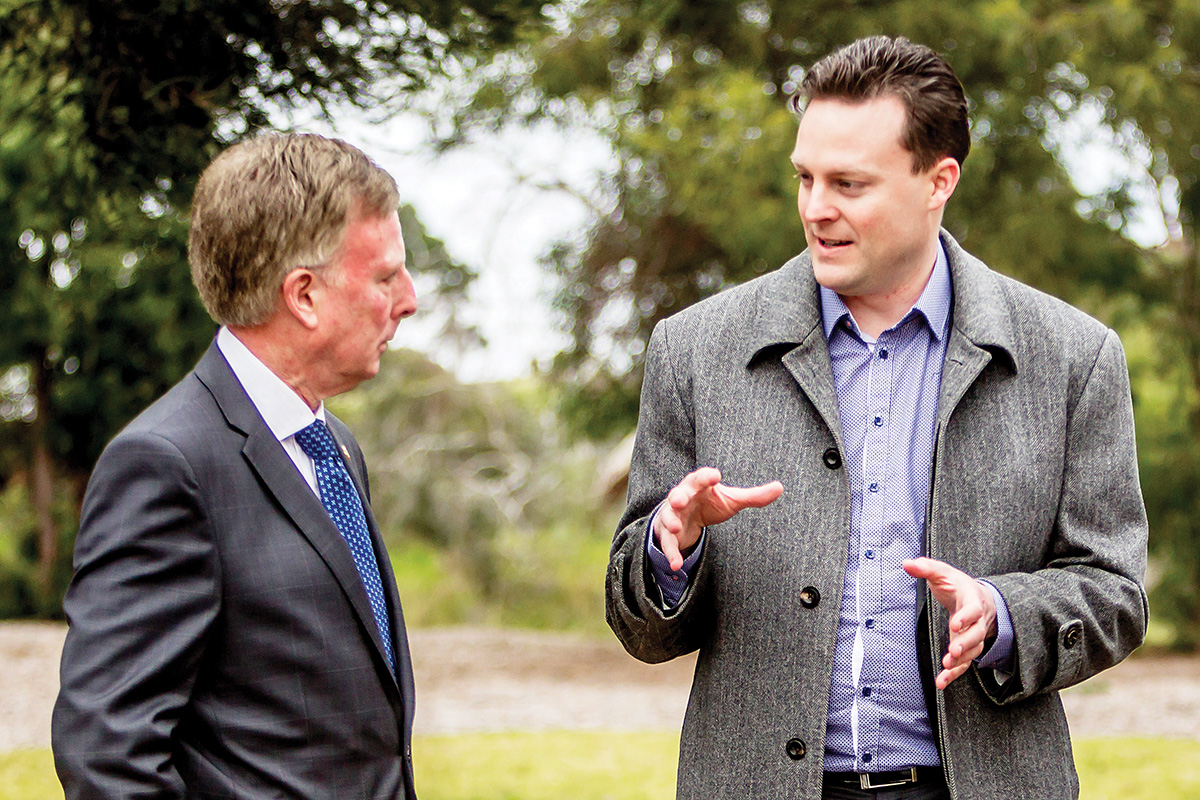 Changing times: In August 2017 Mornington MP David Morris and his federal Liberal ally, Chris Crewther, then MP for Dunkley, were working together to have a car park built in Mount Eliza. Now, they are competing against each other to be the party’s candidate for Mre Morris’s seat in next year’s state election.
Share
Facebook Twitter LinkedIn Pinterest Email

THE Liberal Party will next week choose its candidates for November 2022 state election for the seats of Hastings and Mornington.

David Morris, who has safely held Mornington since November 2006, is being challenged by Chris Crewther, who lost the federal seat of Dunkley to Labor’s Peta Murphy in 2019.

Dunkley, which Mr Crewther lost after one term, had previously been held until 2016 for 20 years by Liberal Bruce Billson.

In July, Mr Crewther failed to get his party’s endorsement for Dunkley in next year’s federal election and in September lost to Sarah Henderson in a bid to fill the Senate seat left vacant by the resignation of Mitch Fifield.

In Hastings, there is also a two-way contest to fill the vacancy being left by retiring MP Neale Burgess.

Mr Burgess publicly announced his intention not to seek re-election next year on Thursday 11 November (“Burgess calls time after 16 years” The News 16/11/21).

Although nominations for his seat closed the following day, party insiders say his intention to not stand was “known for some weeks”.

The two Liberals seeking to take his place as the MP for Hastings are Julie Morris and Briony Hutton.

The party meets to choose its Hastings candidate next Thursday, 9 December.

The Labor Party has yet to announce candidates for Mornington or Hastings, although Nepean Labor MP Chris Brayne said they would be named on Monday 15 November.

Changes to the electoral boundaries and voting patterns based on the previous state election give Labor a small winning margin in Hastings and Nepean, while Liberal-held Mornington remains unchanged (“Labor ‘wins’ with boundary changes” The News 5/7/21).

On Saturday 13 November (two days after Mr Burgess announced he would not be standing) Mr Brayne contacted The News to say that Ms Hutton should resign from the Committee for Mornington Peninsula because she wanted to be the Liberal Party’s candidate for Hastings.

He repeated his call last week, saying Ms Hutton should step down from her position with the lobby group because of claims on Facebook and its website to be an independent organisation.

Although Mr Brayne did not leave his job after being selected as Labor’s candidate for Nepean, he says Ms Hutton’s position is different as the committee “seeks to get money from [government] grants”.

Comparisons were not applicable “as my jobs were in the private, commercial sector”, he said.

Mr Brayne said Ms Hutton’s Liberal Party membership and desire to be an MP “shows they’re [the committee] not independent”.

The Committee for Mornington Peninsula’s president, Shannon Smit, said Ms Hutton had been on leave without pay since 4 November, “to pursue an opportunity to become a political candidate”.

“Her leave arrangements remain in place to avoid any potential conflict of interest, given the apolitical nature of the CfMP,” Ms Smit said.

Ms Hutton has previously worked for Flinders MP Greg Hunt as an electorate officer and as an administrative officer in his capacity as health minister in Canberra.

“Briony also works part-time as a business development executive at a local nursing agency, and as a musician in her own small business where she sings at weddings and venues across the peninsula,” the committee’s website states.