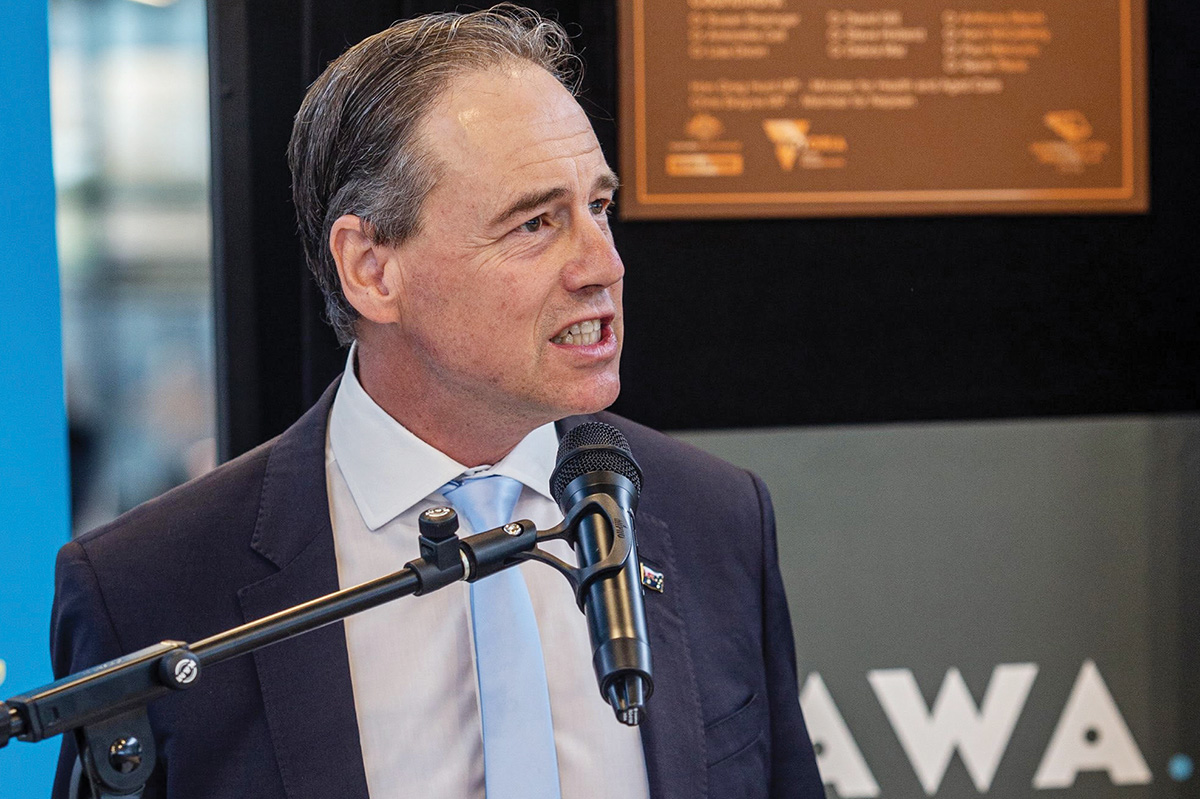 AFTER more than 20 years representing the people of the Flinders electorate in federal parliament, Liberal Greg Hunt is looking forward to spending more time at home with his family.

When announcing his retirement from federal politics last week, Mr Hunt told parliament “it’s time to turn to focus on another family: Paula, Poppy, James, Elsa and Charlie the cavoodle”.

“But for all the time that we have spent together, and as fond as I am of the Prime Minister [Scott Morrison] and the Treasurer [Josh Frydenberg], my card is ultimately elsewhere – sorry, Josh,” he said.

“It is with my family. My amazing wife, Paula, who is in the gallery today, is a nurse, carer, counsellor and confidante. But perhaps above all else she’s raised two beautiful children largely as a single mother.

“I am so immensely proud of Poppy, who is going into year 11, and of James, who is about to go into senior school. They’re both getting awards this week and, again, I’m not there. On Sunday they looked at me and said: ‘Dad, this is your last chance to be a proper dad. It’s time to come home, Dad’.”

His announcement is an illustration of the ever-changing circumstances and decisions in politics. On Friday 1 October Mr Hunt told The News: “I have been pre-selected and am running.” Two months later he was telling parliament that his place as the candidate for Flinders at next year’s election should be taken by a woman.

“I think it is time, subject to the will of the local branch members, for a strong, brilliant woman to be the Liberal candidate for Flinders. And I’m very confident about the future of this great party in this coalition.”

Zoe McKenzie, who has previously worked for Mr Hunt while health minister and former trade minister Andrew Robb, is tipped as succeeding Mr Hunt as the Liberal Party’s candidate for Flinders.

Ms McKenzie is on the board of the lobby group Committee for Mornington Peninsula, whose executive officer Briony Hutton is seeking Liberal preselection for the state seat of Hasting held by Neale Burgess, who will not seek re-election next year.

The Labor Party’s candidate for Flinders is Surbhi Snowball while Voices for Mornington Peninsula is expected to soon announce its backing for an independent.

Meanwhile, Mr Hunt’s foreshadowed exit (he will remain health and aged care services minister until the election, which could be as early as March) saw him praised from many quarters.

Mr Hunt was first elected in 2001 after being “handed the baton” by former Liberal Defence Minister Peter Reith.

His decision to step down follows 20 months of what has arguably been the most difficult time faced by an Australian health minister – the coronavirus pandemic.

However, there have been criticisms of the government’s handling of the crisis with many deaths recorded in federally-controlled aged care homes and the Macquarie Dictionary making “strollout” its word of the year, in reference to the time taken to provide Australians with COVID-19 vaccines.

“When I think back to the fear and the concern … in February and March last year, and I look at that which has occurred around the world and the lives that have been saved here by comparison, I’m so proud of this government, of this parliament and of this nation, and all the things that have been done to save lives and protect lives,” Mr Hunt told parliament.

After saying he believed the country was “well prepared for the future” and thanking party members in his electorate and “the extraordinary [electorate chair] Peter Rawlings—and his predecessor, Julie Heron”. He also named six of his staff “who have served for a decade: Lynne Strahan, Sarah Meredith, Tina McGuffie [now speechwriter at Mornington Peninsula Shire], Denise Garnock, Lisa Burgess and Wendy Black”.

“I look at the incredible talent on the back bench, the middle bench and the front bench, and I know that in the leadership of the prime minister we see someone where the bigger the issue, the clearer he knows the way. That’s it. I think that’s because he understands Australians, and he trusts Australians,” Mr Hunt said.

“The highest of all honours is the simplest. We are all representatives, and I have been graced and favoured by the people of Flinders to represent the area in which I grew up – the Mornington Peninsula and Western Port – and our strongest role is when we are partners with our community. Gunnamatta Ocean Beach, Point Nepean, the Somerville Secondary College, Balcombe Grammar, the Mornington cancer centre and the Abacus autism centre in Hastings—all of these things are meaningful and real.”

And then, without acknowledging the exact time of the election, Mr Hunt ended his speech: “And there’s a lot more to do over the next six months. To paraphrase my favourite film, The Princess Bride – we’ve all got our secrets – there’s a country to protect, medicines to list, a budget to prepare and an election to win, but, when all of that is done, it will be time to come home.”

What they said about Greg Hunt

TREASURER Josh Frydenberg said the decision to not seek re-election by his longtime friend was a “big loss for me and his electorate”.

“He’s my best friend in parliament, I was the best man at his wedding,” Mr Frydenberg said. “We’re the godfather to our respective children and he has made a really great contribution [to the health portfolio].

“I think Greg has done a sterling job.”

Mornington (Liberal) MP David Morris: “Greg’s appetite for hard work, and his commitment to liberal values saw him rise to become a member of the Australian Cabinet. His intellect and skills saw him comprehensively meet the challenge of managing the COVID pandemic as Minister for Health. But despite achieving high office he never forgot that his first and most important job was to serve the people of Flinders as their representative in the federal Parliament.

“Greg has served both  the nation and his community with distinction and leaves very big shoes for his successor to fill.”

Hastings (Liberal) MP Neale Burgess: “I have been honoured to work with Greg Hunt for the majority of his 20 years serving our community. From my close-up view, there is no question in my mind that Greg has been the best minister I’ve ever known.

“I will be forever grateful that when the world ran into a one in 100 years crisis, in COVID, Greg Hunt was in the role to lead Australia to safety.

Nepean (Labor) MP Chris Brayne: “Greg has been the federal Member for Flinders for more than two thirds of my life. I remember him visiting my class in grade 4, and then I grilled him when he attended a year 9 question and answer session.

“I wish him and his family well for the future.”

Mornington Peninsula Shire mayor Cr Anthony Marsh: “As a council we are sad to see such an active and engaged local member retire.

“Greg works incredibly hard and has been a great champion for the Mornington Peninsula in federal parliament. He is determined and persistent and obviously cares passionately about getting the best outcome for this region. His dedication to our community is abundantly clear but after 20 years on the job he deserves a rest!

“We wish him all the very best for the future.”

Cr David Gill: “Greg has done a lot of good work for the Mornington Peninsula. However, we disagreed on matters of principle at times.

“I wish Greg the best in whatever he chooses to do next.”

Australian Private Hospitals Association CEO Michael Roff: “Greg Hunt has overseen some of the most challenging times for the health care sector, leading the Australian response to the COVID-19 pandemic. His efforts at the outset of the pandemic ensured Australians had access to the full hospital system – bringing public and private hospitals together in an historic agreement.”

Beyond Blue Chair Julia Gillard: “Mr Hunt is a caring and passionate advocate for mental health.

“As federal Health Minister, he embraced change and innovation, and worked tirelessly to address the most pressing issues in mental health and suicide prevention.

“Notably, he seized the potential of telehealth to expand access to mental health and wellbeing support. He recognised the healing potential of universal aftercare for those in suicidal distress. And importantly, he championed the voices of lived experience, talking openly of his own family’s experience with mental illness.”